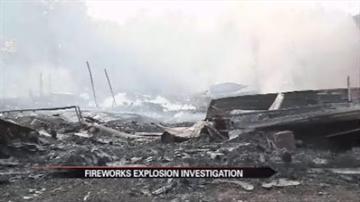 ROCHESTER, Ind. -- Firefighters have been at Windy City Fireworks all day putting out hot spots trying to get the area safe for investigators. They will try to determine how the fire started Wednesday night.

People from all over Rochester could see the smoke and hear the explosions of fireworks.

"There was fireworks exploding and going up in the air past the snorkel truck. There was some loud explosions that carried on for approximately an hour and then they started getting it under control,” said Conley.

With flames shooting high into the air, crews tried to keep the fire from spreading to neighboring trees and buildings

Half a dozen fire departments were on scene. Officials say they struggled to bring in enough water.

After about 4 hours, the fire was finally out.

The owners say this business has been in their family for 35 years and they're appreciative to the entire Rochester community for their support through the years however, they are still trying to process this immense loss.