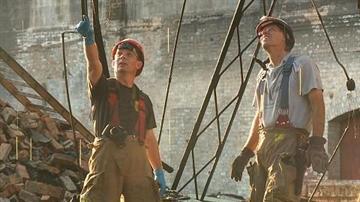 Flames were leaping off of a debris pile behind the old South Bend Range Corporation building just after 6:30 p.m. Tuesday. The owner of the building, Rozell Newbill, was there at the time and called for help when he realized he would not be able to put the blaze out with a fire extinguisher.

For the past three months, demolition had been underway; clearing an 80,000 square foot area behind the massive three story concrete and brick building, constructed prior to the 20 century. According to Newbill, sparks from a cutting torch must have landed on nearby debris and started the fire.

The fire smoldered for nearly three hours before Newbill noticed the smoke and flames. Some bystanders said they could see the thick black smoke several blocks away, at Olive and Sample streets, soon after the fire broke out.

The South Bend Fire Department responded to the fire sending several engines and at two ladder trucks. When they arrived, a wave or relief washed over them when they found out the fire was contained to the exterior of the large vacant building.

Large industrial buildings are extremely dangerous places to fight fires and the South Bend department doesn’t take unnecessary chances. After being told there was no one in the old manufacturing building firefighters attacked the blaze from above.

One of the department’s Battalion Chiefs, Nick Tekler, said things could have escalated out of control if they had been called later. “[The fire] could have burnt the whole block down,” said Tekler.  He credits well-trained firefighters who responded for stopping that from happening.

Within minutes the blaze was out, and fire inspectors began to piece together how the fire started. Meanwhile, the building’s owner was ecstatic the firefighters were able to keep his livelihood from going up in flames.

According to Newbill, renovations inside the old manufacturing plant are underway and he expects them to be finished by this winter. He shared his plans for renovation as well, indicating he would like the building to house a flea market, a gym, state of the art offices, apartments, and possibly a night club.

How the zoning would work out to allow all of that is unclear, and Newbill made no mention whether or not he had approached the city with his plans.

Newbill also said he is planning to turn the area that burned on Tuesday evening into a manufacturing building that will create skin and hair products, which he can sell all over the world. “I love them. They’re my heroes,” said Newbill.

As for the fire, according to Newbill, it is not slowing his plans down since it occurred in an area he planned to demolish anyway. On Friday, Newbill plans to open a small food vending shack, serving up barbeque, in the lot north of the building. An outdoor flea market will be soon to follow, said Newbill.