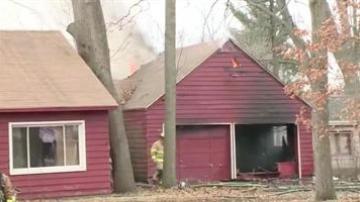 ST. JOSEPH COUNTY, Ind. -- Since April 1st, there have been 42 brush fires in the county because of people illegally burning leaves. Firefighters and county officials want residents to remember it is illegal to burn leaves until the second week of May.

The illegal brush and leaf fires have caused quite a bit of damage.

Clay Township Fire Marshal Dave Cherrone says typically it's not the person who started the fire who suffers property damage - it's the innocent neighbors.

"Everybody wants to clean their yards up they just don't seem to want to wait until they actually can," said Cherrone.

Those who are illegally burning leaves are ending up with fires that are out of control because of the wind and dry vegetation.

"We've already had a couple of structures that were part of those fires initially started out as somebody burning a pile and it of course spread to a structure," said Cherrone.

A house on Sundown Road caught fire after a neighbor lost control of a burning leaf pile.

"Most generally the people who do suffer the loss are the neighbors because no one ever seems to burn close to their own house," said Cherrone.

There is something you can do to protect yourself and your property if you see someone burning illegally.

"You can either call the health department, it's a health ordinance or they can call the county police at a non-emergency number and report it to them so that someone can go out and enforce to those folks that you're not supposed to be burning," said Cherrone.