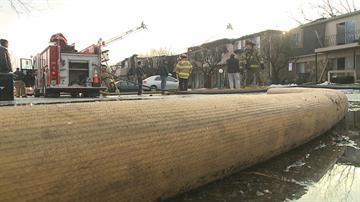 SOUTH BEND, Ind. – Victims of the early morning Park Jefferson Apartment’s fire slowly made their way back to the complex during the afternoon to salvage what they could. The American Red Cross said it’s helping 33 families who have lost almost everything. Friday’s fire comes less than three months after a fire that affected eight units at the same apartments.

Travis Carrington is one of the victims who said he walked away with almost nothing.

“My shoes are gone, my bed is gone, pretty much everything is gone,” said Carrington.

South Bend Fire Marshall Federico Rodriguez said the fire spread quickly and there was a partial roof collapse.
The timing between the two recent fires has his crews experiencing déjà vu.
“We’ve had them here previously so we’re well experienced with fire in this area,” said Rodriguez
The way the fire spread across the complex has many people questioning if there were fire walls.
“There are some firewalls, but not sufficient firewalls,” said Rodriguez.
The property manager of Park Jefferson told ABC 57 there is a firewall for every eight apartment units, and a maintenance man said the protection goes all the way up to the attic.
The second fire chief on the scene told ABC 57 that the complex is notorious for fires, and that some people wrongly classify firewalls.
He said that what some people call firewalls are actually just smoke barriers that will act like fuel for a fire.
Fire investigators on the scene said they weren’t able to actually get inside the building until after noon on Friday. They said it will take a couple of days to finish the investigation and it won’t be after that they will know the cause.
Share this article: