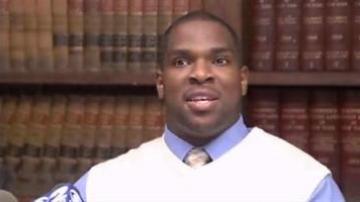 QUEENS, NY -- A bully in New York is making national headlines but not for beating up a classmate.

Gym teacher John Webster is 5'10 and weighs in at just over 200 pounds, and he taught at a school in New York City.

Well, he did until a 50 pound first grader beat him up back in April.

Webster suffered a broken ankle and injured a knee and course, humiliation.

"It's very humiliating and defaming, but at the same time, it's true," Webster said.

Webster has been out of work since the incident occurred and now he wants back pay by the school system.