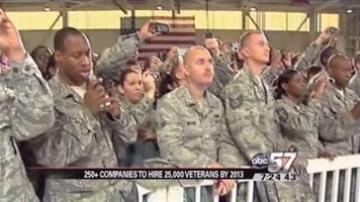 HAMPTON, Va. -- President Obama wrapped up his three day bus tour to help promote his jobs bill. On Wednesday, he was joined by the First Lady for an important jobs announcement that will affect thousands of veterans.

First Lady Michelle Obama announced a new commitment from more than 250 American companies. They are promising to hire 25,000 veterans or their spouses by the end of 2013.

These are companies that are making these pledges, not just because it's the right thing to do, or because they feel patriotic; they're also doing it because it's good for their bottom line.

The First Lady says it is the largest coordinated effort to put veterans back to work in years. Some of the companies involved in the new initiative include Coca-Cola and Tyson Foods.