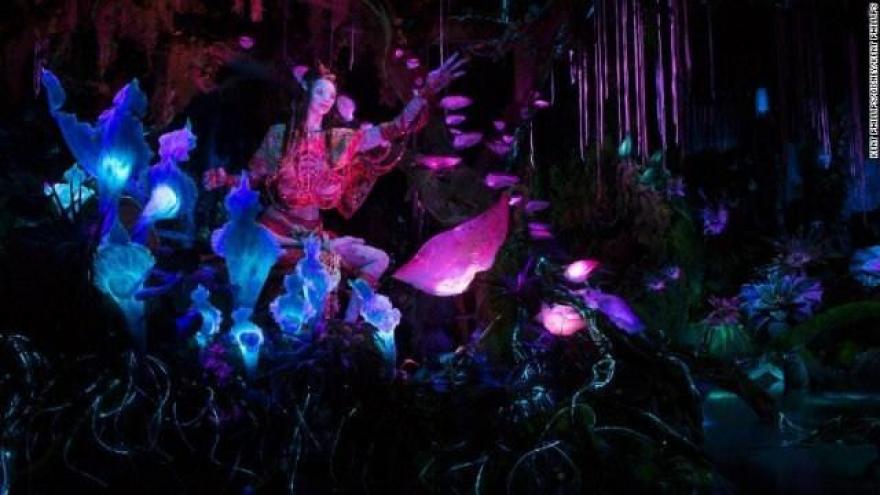 (CNN) -- James Cameron's "Avatar" was a game-changer for me.

Its bioluminescent alien world unfolded around the audience with an immersive 3-D I hadn't thought possible, even as a lifelong cinephile.

As the credits rolled, I walked out of the theater eight years ago in a giddy haze, determined to see it again as soon as possible.

I got to relive that feeling this week on Avatar Flight of Passage, a virtual reality thrill ride and the crown jewel of the lovely "Pandora: The World of Avatar" themed area opening at Walt Disney World Resort's Animal Kingdom on Saturday.

The ride evokes one of the movie's most jaw-dropping spectacles, hero Jake Sully's first flight on the back of a winged, dragon-like creature called a banshee. The difference? This time, you're in the saddle.

The 12-acre Orlando park -- six years in the making -- is set in an area of Pandora not seen in the film. But thanks to Cameron's obsessive attention to detail -- truly, Tolkien would have been jealous -- the entire planet has been extensively charted.

Disney's "imagineer" designers chose to create the Valley of Mo'ara, a landscape with swaths of jungle, flowing streams, a cave teeming with bioluminescent life and floating mountains. (Admittedly, these mountains are not so much floating as stacked atop one another, but one does have to work with gravity, even in the vicinity of the Most Magical Place on Earth.)

Getting matched with your own avatar

Those floating mountains, called the Hallelujah Mountains, are where you'll access Flight of Passage, via a short and gentle climb up verdant passageways, goosebump-inducing banshee screeches audible in the distance. (I spotted the man himself up at the summit: A tropical-shirted Cameron, plus entourage, seemed to be just emerging from the ride.)

The path leads to the doors of a research facility, where you'll encounter a giant humanoid Na'vi avatar floating in a tube. Here, guests are roughly following the journey that new arrival Jake (played by Sam Worthington in the movie) takes at the film's start.

Next, visitors are ushered in a small group into an airlock where each person is "matched" with an onscreen avatar's face. An informational video explains how you'll be linked in to your counterpart, already out in the world of Pandora, who will be taking a flight on the back of a banshee (or "ikran," in Na'vi).

The flight simulators are deceptively simple: You sit on what looks like the body of a small motorcycle, donning a feather-light pair of plastic goggles. Once you're settled, a back restraint locks in, keeping you in a slightly forward-bent position. And then ...

You're off, plunging straight down from a cliff top into a valley, swooping perilously through gargantuan trees and around mountain curves, soaring what feels like inches over a herd of stampeding beasts, zooming through the curl of a towering emerald wave.

Wind, spray and scents surround you. It feels, it really feels, like you are flying.

Apparently I wasn't the only one who had to stop myself from yelling "More!" when the four-minute ride was over.

Avatar's stars came for the opening

"I wanted to do it again the minute it ended," Stephen Lang, who memorably played baddie Colonel Miles Quaritch, says.

Like most of the cast, Lang had come for the park's opening.

"I needed to confirm if it was every bit as extraordinary as I thought it was the first time," Lang said. "And it is!"

Sigourney Weaver, the film's Dr. Grace Augustine, was a three-time rider, while Cameron was said to favor simulators number 8 and 9, which suggests he's been on a lot more than that.

"Everyone I've spoken to is just overpowered by it," Lang says. "It makes you soar."

Amy Jupiter, one of the ride's designers, told me the experience is structured as an emotional and transformative journey.

"First, you're put on a banshee. You don't know quite how it's going to work," she says. "Halfway through, you come to a stop in a bioluminescent cave. You have so much adrenaline. Eywa (the Pandoran nature deity) sees you. And you realize you actually know how to control the banshee. You know how to fly!"

When it's time to wind down after your first (or second or third) flight, the Na'vi River Journey, the exhibit's other main attraction, is an excellent follow-up. It's also a much gentler entertainment option for the whole family.

This slow and steady boat ride takes you through a cave where you'll see glowing flora and fauna, some familiar from the film and some new. Tribal Na'vi singing and music seems to emanate from everywhere at once.

An animatronic Na'vi Shaman of Songs greets you toward the end, her huge yellow eyes so attentive you'll find yourself questioning whether she's really a robot after all.

The rest of this Pandoran wonderland is a wild botanical garden, full of outsized flowers and plants; the largest specimen, called a Flaska Reclinata, sprays a mist of "spores" into the air when petted.

There's also a natural drum circle, stone structures with hollow skins you can thump on to create rhythms. The park's "cast members" dressed like hippies will invite you to partake -- and many likely will, as this is one of the rare features of the landscape, beyond the two attractions, that's interactive.

The Pandoran botany is much more impressive after dusk, when its glittering bioluminescence is lit up like a naturally-occurring Vegas.

Turquoise pods glow alongside streams full of neon-pink lilies and delicate fiery-orange flowers. Growls, chirps, buzzes and roars echo through the dark. But even in the heat and sun of the Orlando afternoon, the exhibit makes a powerful and metaphorical statement about a planet once nearly destroyed by the hubris of humanity, now restored to its former glory.

"This park pays respect to all the creatures of Pandora, in the way the Na'vi do," says Lang. "And this is coming from someone who, in the movie, represented the forces of regression and change for the worse. I think it strikes a very deep chord in people, about a wish that we have for the replenishment and nurturing of a planet."

As with all things Disney, Pandora is also commodified at the expansive gift shop and snack bars: Nothing says authenticity like a banshee key ring or a Na'vi-inspired smoothie.

This merch is worth the price tag

But there's one item that will definitely have "Avatar" fans grabbing for their wallets: the $49.95 shoulder banshee, a colorful mini-replica of the winged beast whose wings and mouth can be operated with a hand control. Souvenir-wise, it's a standout -- and a gorgeous reminder of your four minutes of flight.

In the future, I hope Disney opens up smaller paths through the plant life areas so visitors can really immerse themselves in it. Likewise, it would be helpful to have placards naming the different alien plants and what the Na'vi might use them for.

In the meantime, you'll still come away impassioned about the value and preservation of nature, whether on alien planets or right here on Earth. Hayalovay, Pandora - that's Na'vi for "until next time."

Pandora: The World of Avatar will have extended hours through July 4, from 8 a.m. until 11 p.m. Animal Kingdom tickets start at $99 for one day.