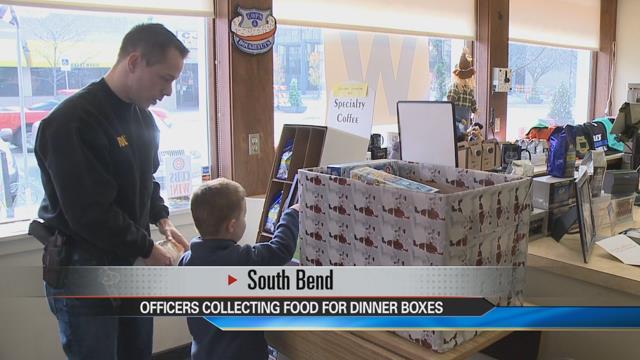 They are collecting non-perishable items at Dainty Maid Precinct to help fill Christmas dinner boxes for their Elficers program.

Their donation box that’s been there since 5 a.m. on Sunday right by the entrance. Officer Greg Howard, who is in charge of this event, says it’s something they’ve never done.

“This year is the first year we’ve actually initiated a food drive and try to get as much food as we can,” he said.

Along with that they will be delivering gifts to families who may need a little help this time of year.

For those wanting to donate, Elficers have found a way to cut down on duplicates and even have a designated day for what they would like.

Sunday they are asking for stuffing. Monday calls for potatoes, Tuesday you can bring gravy or cranberry sauce. Wednesday canned veggies, Thursday, mac and cheese and on Friday desserts.

All donations go to the Elficers program, which helps provide Christmas dinner boxes.

Given recent police involved shootings this act of kindness couldn’t have come at a better time.

According to CNN at least 61 officers have been shot and killed this year, that’s well ahead of last year, but Officer Howard says he wants to focus on the positives.

“There’s a lot of things that we’re seeing that could shed a negative light on law enforcement. There are some bad things that come with the job but there are a lot of good things that don't get a lot of light shed on. The positives by far out weight the negatives,” he said.

On Saturday, December 3rd officers will be stuffing a truck around 10 a.m. after the parade at Four Winds Fields.