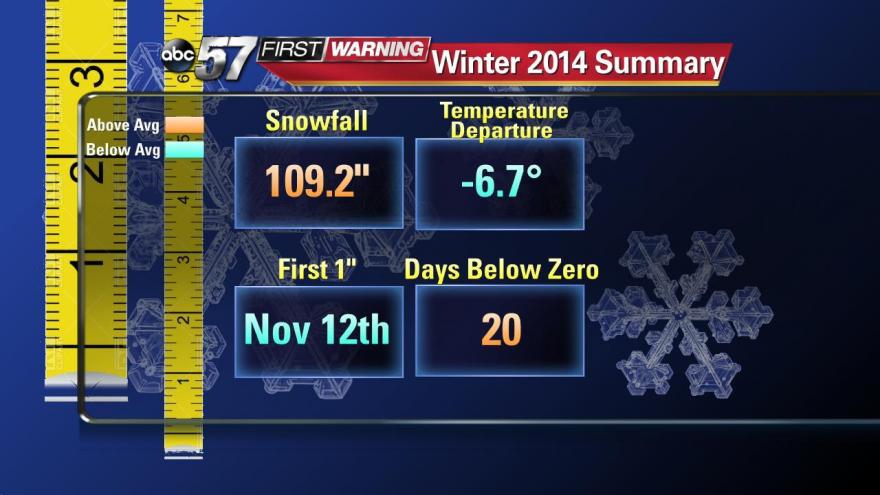 Many describe the winter of 2014 with one word, brutal! That might be an understatement. Over 100 inches of snow, 20 days with sub-zero temperatures. It was one of the coldest and snowiest winters on record (Fig 1).  There colder years, and snowier years but winter 2014 will be remember for the fact that once it started snowing it seemed to never end.  So what about this year?

Looking at the past 40 years we can learn some things.  One, snowfall can vary a lot year to year. Two, a four year run of increasing snowfall would be unprecedented.  So a winter worse than last year statistically, is unlikely. Our 30 year climate average for snow is 66.6"that doesn't mean its our typical snowfall, just where we average out, and a good standard measurement(Fig 2).

Weather patterns change on a weekly to bi-weekly basis. There are long range cycles that impact seasons or even many years.  You may know of at least one. El Nino, the warming of equatorial waters in the eastern pacific. El Nino typically brings milder and less snowy winters to Michiana. But this year's El Nino is weak and may be a minor player (Fig 3).

There are other factors, remember the " Polar Vortex"? The circulation of cold air in the arctic that can throw pools of frigid air over the U.S.  This is still the x factor for the winter. As the pattern is still in the cold phase and that would mean lake effect snow.

We've already seen our first measurable snowfall  on Halloween, but we have yet to see our first 1" or more, that typically happens towards the middle of November (Fig 4).

Snowfall: The latest  short term outlook  has temperatures below normal, if we get through that without an inch of snow, it's likely we'll go into a drier stretch that could keep significant snowfall away into December. My December 15th first inch, reflects this trend for a later significant snowfall. With less snowfall in the early winter, that can be the factor that keeps us below average for the season. Here's a look at monthly average snowfall from the preview story. I think we will see fewer major storm systems, thanks to El Nino keeping storm tracks farther south, but still see clippers systems with arctic air that will provide lake effect snowfall, this will keep us near or just below average ( 58 inches).

Temperature: This forecast is more of a toss-up but with current trends still leaning colder, from the the cool year of 2014 I'm keeping temperatures just below average. Temperature departure is a measurement of the average seasonal temperature from normal. Last year's -6.7° was the 7th coldest on record. The Jet Stream and related arctic air "Polar Vortex" is still in a phase to bring us burst of cold air. This will work against an  El Nino, although weak, tends to be a bit milder. Plus the "Polar Vortex" is more unpredictable in nature. The biggest difference will be less days with sub zero temperatures, 5 is very close to the average of 5.3 days below zero per season.

No matter the outcome we'll have your First Warning.
Share this article: