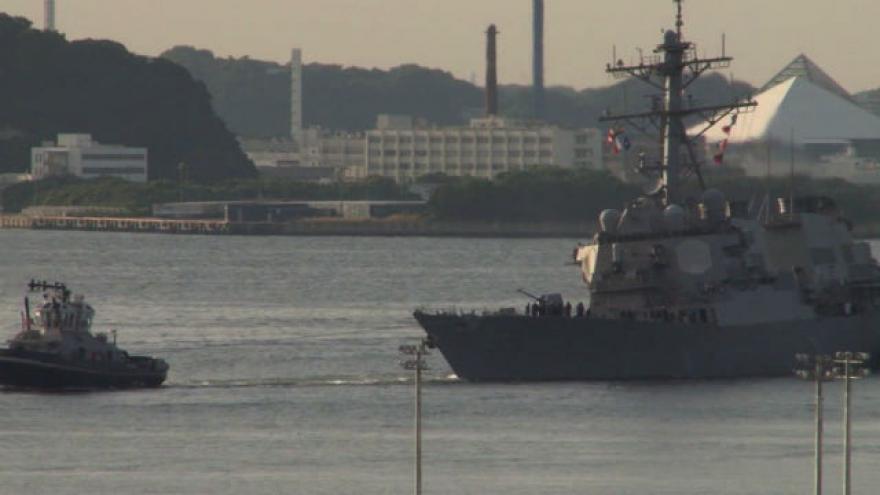 (CNN) -- The USS Fitzgerald's captain, Cmdr. Bryce Benson, who was injured in the ship's deadly collision with a commercial vessel, took command of the guided-missile destroyer last month.

"I look forward to being with my Fitzgerald family in support of future missions and exercises," Benson said in a Navy statement at the time.

"This is the best ship and the best crew on the waterfront, hands down!" he said.

"I am proud to work alongside the Navy's best and brightest men and women who protect and support the Pacific region and our allies."

The 10,000-ton destroyer and the ACX Crystal, a 29,000-ton container ship flagged in the Philippines, collided early Saturday local time off Japan's Izu Peninsula, officials said. Benson was flown off the crippled ship by helicopter after the accident and was being treated at the naval hospital at the US naval base at Yosuka, Japan, said Vice Adm. Joseph Aucoin, 7th Fleet commander, as were two other sailors who were medevaced.

He is a native of Green Bay, Wisconsin.

Benson graduated from Marquette University in Milwaukee in 1999 and earned his commission through the Naval ROTC program, the Navy said. Benson also earned a master's degree in organizational management from George Washington University.

According to Benson's LinkedIn profile his bachelor's degree is in history, and he participated in the Les Aspin Center for Student Government at Marquette.

At George Washington, he participated in the Navy Washington DC Internship Program, the profile states.

Later, at the National Defense University: Joint Forces Staff College, he studied "joint and combined warfighting" as part of his "professional military education," according to the profile.

Benson served at sea on the pre-commissioned ship USS Winston S. Churchill and USS Kauffman and was "deployed to the 5th Fleet in support of Operation Enduring Freedom," the Navy said. In 2006, he was assigned as the weapons officer on USS Forrest Sherman and participated in the maiden deployment to the 6th Fleet Area of Operations.

In 2007, Benson screened for the early command program and later served as the executive officer, then as commanding officer of the USS Guardian, deployed from Sasebo, Japan, from 2008 to 2010.

The Navy says the Fitzgerald is one of eight destroyers assigned to Destroyer Squadron 15 that are forward-deployed to Yosuka Navel Base, supporting security and stability in the Indo-Asia-Pacific region.