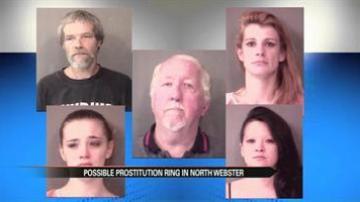 According to the Kosciusko County Sheriff's Department, officers conducted a raid at a hotel in Warsaw that resulted in the arrest of four people allegedly involved in the promotion of prostitution.

Officers also executed a search warrant on a trailer behind the gentleman's club and served an active warrant on the club's owner Samuel Stimmel for corrupt business influence. He was also preliminarily charged with felony promoting prostitution.

Police say the arrests were the result of a fourth-month long investigation into the businesses.

Four others were arrested on preliminary felony charges of promoting prostitution.

"There's always a level of illegal activity available and some people decide that's the avenue they wish to get involved with," said Sergeant Chad Hill of the Kosciusko County Sheriff's Department.

Then in October - a tip led them next door to Stimmelator's Gentleman's Club where they uncovered what they are calling a prostitution ring.

Police say the two are connected.

"It's not always necessarily seen, but it obviously occurs in our county. Sometimes, it's just difficult to make the investigation and get the full amount for a probable cause for the arrest," said Hill.

We tried reaching out to the gentleman's club to find out more, but workers locked the doors and wouldn't come out.

Next door, several customers told ABC57 News off-camera they were disappointed because they say California Dreamin' was a quick and easy place to buy fake pot.

Stimmel bonded out of jail Thursday afternoon. The other four remain in jail.

We tried reaching out to Stimmel over the phone and in person but have not been able to get a response.