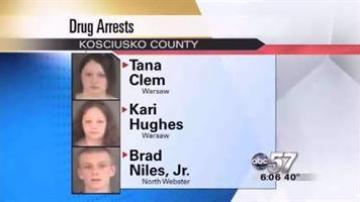 Officers from three Kosciusko County agencies came together to make the arrests.

Brad Niles Jr. of North Webster is accused of having possession of a controlled substance and felony charges.

Tana Clem, 19, and Kari Hughes, 33, both of Warsaw were each charged with one count of dealing in a controlled substance.

All five suspects are being held on bond.