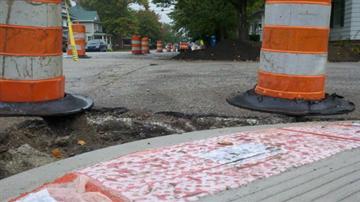 MISHAWAKA, Ind. – Sidewalks are being torn apart across Mishawaka to improve safety for area schools.  School City of Mishawaka doesn’t have bussing, so most students walk or bike to school.

“One of our priorities is student safety,” explained Mishawaka’s Mayor Dave Wood.

Currently, the city is revamping sidewalks on Main Street used by students to get to nearby Emmons Elementary.

“It was busted up into little pieces, some areas were better than others,” described Larry Fike who lives across the street from the work.  “The curbs were low right to the street level so you’d get some flooding and rain through there, puddles and dirt washing up through there.”

The good news for Mishawaka is that the work is being paid for by the Indiana Department of Transportation’s (INDOT) Safe Routes to School program.  The work leading to Emmons Elementary is being funded by $160,723 from the INDOT program.  Mishawaka wants to continue the program each year and fix up sidewalks around city schools.  But, the question raised by many residents is should Mishawaka be using state money to pay for a city problem?

“I don’t necessarily agree with that, local projects should be done locally,” explained Larry Fike.

“There were specific funds for sidewalk improvements, we applied for those funds and we got that so if we can get those funds successfully…then we’re not going into our taxpayer’s pockets,” explained Mayor Wood.

According to Mayor Wood, the INDOT money will help Mishawaka afford a major renovation in city sidewalks which he says is necessary with a growing and aging population.

“It helps us do more, for sure, than we were able to do without having those,” explained Mayor Wood.  “It puts us that much further along.”

Wood says the city is pushing for a specifically planned “sidewalk master plan,” to study which areas need new sidewalks the most.

As far as the school sidewalk improvements go, the next phase will be to improve walkways leading to Battell Elementary.

On the Mishawaka city website, citizens can fill out surveys about where they believe sidewalk improvement is needed most.  You can find the survey here: www.mishawaka.in.gov/sidewalkbikesurvey