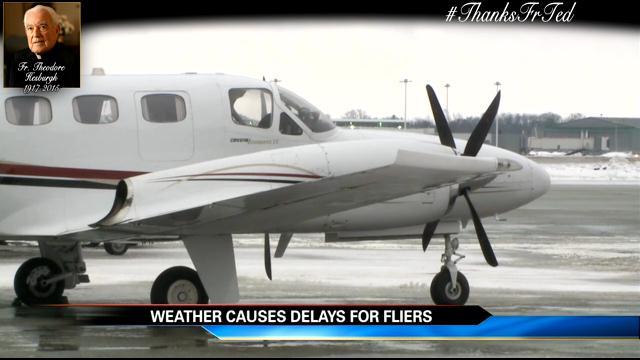 The last few days have been busy for Atlantic Aviation, as they prepare for travelers coming in and out of their airport for Father Hesburgh's memorial service and funeral.

The planes carrying travelers are gliding in under overcast skies, and many had to postpone or cancel their plans.

"We were hoping to have approximately 100 aircraft on our ramp today but because of the ice we had this morning most of those aircraft either canceled their trips in today. About half were able to make it in and some rescheduled to come in Wednesday," said Christi Peterson, customer service manager at Atlantic Aviation.

As soon as their wheels touched the ground, passengers headed straight to Notre Dame, and airport officials say it was a quick trip for many who paid their respects, then flew home.

As for those who were not able to make it in Tuesday morning, Atlantic Aviation is planning to bring the rest of them in on Wednesday.

Several of the scheduled speakers for the funeral had not arrived as of Tuesday.
Share this article: