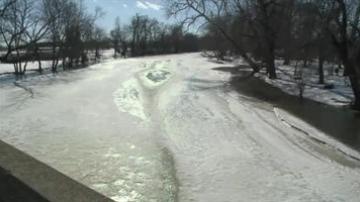 Lawrence Hoover, the Director of the Pulaski County Emergency Management Agency, says the banks of the Tippecanoe River under the Warren Bridge is usually one of the first places to flood.

It poses a danger to residents in mobile homes nearby and drivers who use the roads parallel to the river.

"The ground is frozen solid this year particularly deep and we have a lot of snow cover and then when we had the warm up and the rain, there's no place for the water to go so it runs straight either into the tiles or the ditches and in turn into the river," said Hoover.

Hoover says low-lying areas along the Tippecanoe River are at the highest risk of flooding.

If most of the water doesn't refreeze overnight, county roads 700 North and 675 that run along the Tippecanoe could end up under water.

"If there's water standing in the road, turn around go around it, don't try to go through it because you never know how deep the water is," said Hoover.

Gravel or dirt roads in Pulaski County could become washed out and impassable if they flood.

With water covering the road, you never know what's underneath.

"Is the road even there underneath it? Is the road washed away or is there a pot hole or something in there that you could get stuck in the middle of," said Hoover.

According to the Pulaski County Sheriff's Department, County Road 300 East between 200 North and 300 North was closed Friday because it was washed out.

The most important thing to remember when driving is if you see a high water sign or water standing on the road, don't drive through. There may not be a road under the water.