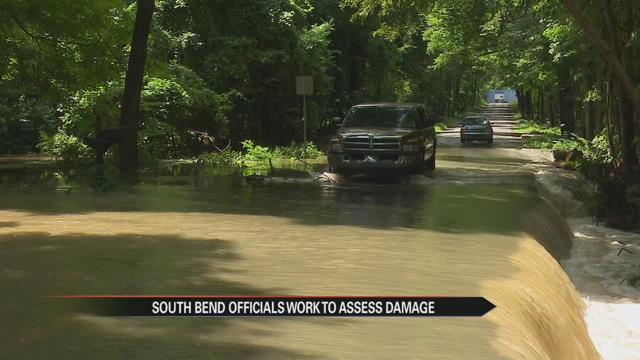 Historic flooding brings with it historic damage, and Chippewa Avenue in South Bend became one of the most unbelievable sights after Monday night’s storm.

The section of Chippewa Ave. right near Beyer Castle completely flooded Monday night, forming a makeshift river and waterfall that gradually ate its way through the pavement Tuesday.

As of Tuesday evening, the water was still steadily flowing across the street – turning part of AM General’s Humvee test track into a pond.

He said scenes like the one on Chippewa Ave. popped up throughout South Bend because the city’s infrastructure was simply overwhelmed by the force of Monday’s rainfall.

Horvath said what’s happened on Chippewa Ave. can happen on any street, because asphalt does not have a structural basis underneath it, so a strong current of water can quickly tear it apart.

“[Asphalt] gets its support from the base [usually soil] underneath it, and so once the water starts eroding that base, it just drops in; it can’t handle it,” Horvath said. “So whether it’s a new road or an old road, it’s gonna collapse.”

By Tuesday evening, at least 3 to 4 feet of roadway had been washed away from the floodwaters.

The road has been closed since Tuesday morning, but people continued to drive through it – which is incredibly dangerous and ill-advised.

Horvath said his department is monitoring every flooded roadway throughout South Bend, and he said they are assessing the damage as the waters recede.