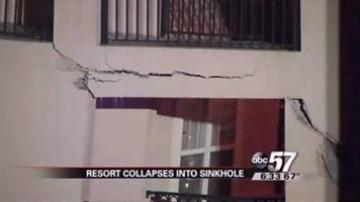 LAKE COUNTY, Fla. — Guests at a Florida resort were evacuated after a large sinkhole caused the building to collapse.

Fire rescue officials say everyone got out okay.

One fire chief on the scene says it appears a 30-foot sinkhole opened beneath the building.

Crews are currently monitoring the situation as the building continues to fall apart.