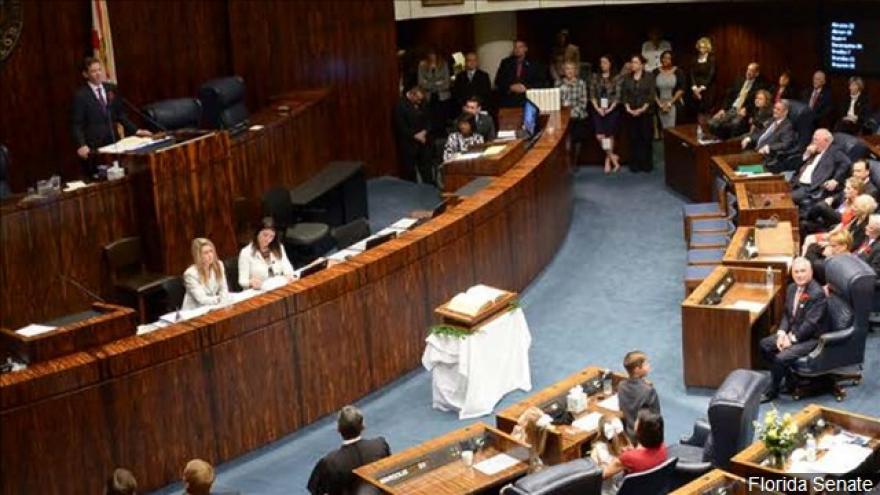 The Florida State Senate narrowly passed a bill Monday that would raise the age to buy a firearm from 18 to 21, require a three-day waiting period for most gun purchases and ban the sale or possession of bump fire stocks, which can make it easier for a semi-automatic weapon to function like an automatic rifle. Photo courtesy Florida Senate

(CNN) -- The Florida State Senate narrowly passed a bill Monday that would raise the age to buy a firearm from 18 to 21, require a three-day waiting period for most gun purchases and ban the sale or possession of bump fire stocks, which can make it easier for a semi-automatic weapon to function like an automatic rifle.

The Senate narrowed a controversial provision in the bill that would allow teachers to be armed.

The measure in its entirety still must pass the Florida House.

The issue of arming teachers has been a major point of contention in debate over the bill.

The changes approved by the Senate would exclude those who "exclusively perform classroom duties as classroom teachers" from being allowed to be armed as part of a program renamed the Coach Aaron Feis Guardian Program. Feis was a victim in the February 14 mass shooting at Marjory Stoneman Douglas High School in Parkland.

The limitation, however, does not apply to classroom teachers of a Junior Reserve Officers' Training Corps program or current service members; and current or former law enforcement officers, according to the bill.

Under the program, school staff members who could be armed must complete 144 hours of training and meet other criteria. The program would be voluntary, implemented only if the sheriff's department and school district agree. School personnel would not be required to participate.

The Senate passed the bill 20-18. The House was expected to take up the measure Tuesday morning. It was not clear whether or how the House might amend the bill. The Florida legislature ends its session on Friday.

Florida Gov. Rick Scott took issue with some aspects of the proposal. ‎

Scott "is against arming teachers," said Lauren Schenone, a spokeswoman for the governor.

"Obviously, this amendment (to exclude some staff members from being allowed to be armed) is a step in the right direction. But, the Governor will review the final bill before he makes a decision," she said.

Schenone said Scott "still has concerns that the bill includes a three-day waiting period. He brought this up during his meetings with Legislators today."

Gunman Nikolas Cruz killed 17 students and teachers at Stoneman Douglas, including Feis, an assistant football coach who school officials said threw himself in front of students to protect them from oncoming bullets.

Survivors of the shooting and parents of victims have lobbied lawmakers to pass stricter gun control measures.

Before the Senate began debating Monday, parents of victims implored lawmakers to pass legislation that would enhance the safety and security of schools, keeps guns away from those who pose a risk to themselves and others and improve access to mental health resources for at risk youth.

"Our message is simple: We must be the last families to lose loved ones to mass murder in a school. This time must be different, and we demand action," said Ryan Petty, whose daughter, Alaina Petty, 14, was killed in the shooting.

Survivors called the Senate measure a start but said the work is far from done.

"These are the baby steps we need!! We have a lot further to go, but progress is progress and that's not to be denied," Douglas student and outspoken activist Delaney Tarr posted on social media.

Another Douglas student, Ryan Deitsch, tweeted that the legislative effort was like "being up a half time -- means nothing until the end."