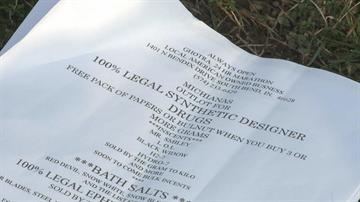 SOUTH BEND, Ind. – Flyers listing a number of legal and illegal drugs that allegedly could be bought at a local gas station turned up on the front door of the West Side Church of Christ on Thursday morning.  The owner of the station said he doesn’t sell the drugs and thinks somebody may be trying to frame him.

The flyers, which look like advertisements, list a number of drugs and bath salts and claim they could all be bought at the Marathon Station on Bendix Drive.

"Our secretary found these sheets of paper here,” described Nathan Prong, the church’s minister.  “It says legal synthetic designer drugs, Mr. Smiley, all kinds of other stuff and she found this advertisement here at the church."

Mr. Smiley is a synthetic drug that was banned in Indiana in 2011.  The flyers also say the Marathon station sells ephedrine products and offers large overseas wire transfers.  The South Bend Police Department also received a copy of the flyers, but officers are skeptical about them.

"All the elements of a criminal enterprise are on that piece of paper and it’s probably not a good idea to push out into the public if you are involved in that," explained Captain Phil Trent.  “We’re obviously questioning its legitimacy, we’re questioning whether it was done by a person who was upset with them and making allegations and making those allegations public.”

According to Captain Trent, notice about the flyers has been sent to officers and city officials in case the public spots them anywhere else.  He said there’s no indication that the station is selling any of the drugs, the station’s owner even told ABC57 that he called a detective to the store to verify that he wasn’t dealing any of the products listed on the flyers.

"Another question to its legitimacy is there's some spell checking that could've been done a little bit better,” described Captain Trent.  “For example if I was Pakistani, I think I'd know how to spell Pakistani."

The flyers say the owner of the store is known as “The Crazy Turban Pakistani,” but misspells the words.  The owner is actually known as “Pappu” and is in fact Indian.  The flyers are littered with misspelled words.

"Oh my goodness, incense is spelled wrong,” said Nathan Prong as he read the flyer.  “They’ve got to be something somebody’s either doing as a prank or trying to hurt somebody’s business.”

The owner of the station said he didn’t know of anyone who would want to pull a prank on him or hurt him.  But, he adamantly denied that he sells any of the drugs listed on the flyers.