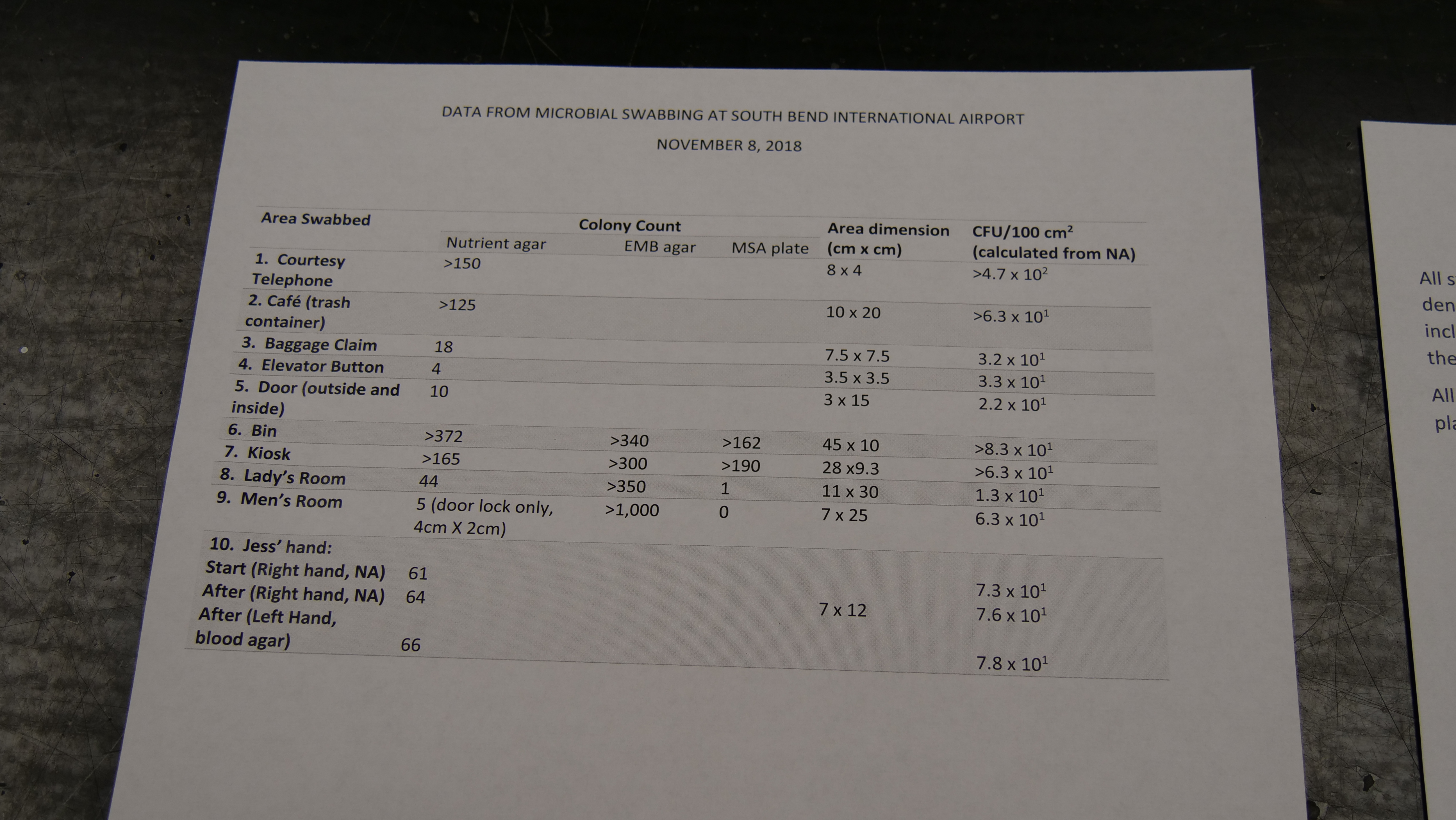 Bacteria yield from each sample IUSB

SOUTH BEND, Ind. -- As you gear up for holiday travel, have you ever thought about how much bacteria could be traveling with you?

ABC 57 teamed up with a science class from Indiana University South Bend to swab down South Bend International ahead of Thanksgiving.

"I’m expecting that it’s going to be very dirty, because we have a lot of microbacteria on our hands, so let’s see how it turns out," said one student.

Those Q-tips produced a kaleidoscope of bacteria lurking on everything you touch in the airport.

“The two most important pathogens…that we care about are E-coli...There could be other viruses or parasites or bacteria from fecal matter or from fecal origin, so when we see E-coli, we should be alarmed that okay, this area has fecal contamination,” said Dr. Yilei Qian, a microbiology professor at IUSB.

E-coli appears as a metallic green material on the plates Dr. Qian's team used as a comparison for the airport samples.

“According to our survey, we did not recover E-coli from the samples, which is good news, so the airport staff did a good job cleaning or maybe Michiana residents did a good job with hygiene practice," said Dr. Qian.

To reiterate, there was NO E-coli found in SBN.

The presence of staph is what turns material in the petri dishes from pink to yellow.

IUSB professors Dr. Qian and Susan Cook say that doesn't mean airports in particular are germ breeders--pretty much any public place is going to have this bacteria, so it's a good reminder to be aware.

There are, however, a few areas that have the highest concentrations: the kiosk, the security bins, and the one with the most bacteria lies on the courtesy phone, not the bathrooms!

“I was surprised that there wasn’t coliforms in the restrooms, but I was happy that they weren’t there, and I wasn’t expecting the courtesy phone to have the highest density of bacteria," said microbiology professor Susan Cook.

Another disturbing winner in the bacteria lottery was Jess's hands.

“[They were] about the same as far as density goes, but the bacteria and the mold looked a little different from one plate to another, which means that just in that short time that you were in the airport, you picked up new organisms, and they were on your hands!...which kind of brings home the idea that we should be washing our hands a lot," said Professor Cook.

Thriving on your hands, surviving in the airport--wherever you travel, it's likely you're flyin' dirty.