Fog may be to blame for early morning crash 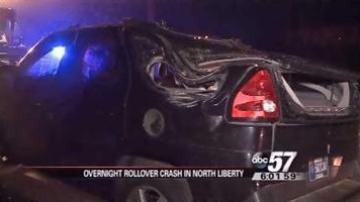 NORTH LIBERTY, Ind. — Police say that fog could have been a factor in an early morning single car accident on State Road 23 in North Liberty.

According to police, the driver lost control going around a curve. The driver then over corrected and lost control causing the car to flip.

Police say that the driver suffered only minor injuries.