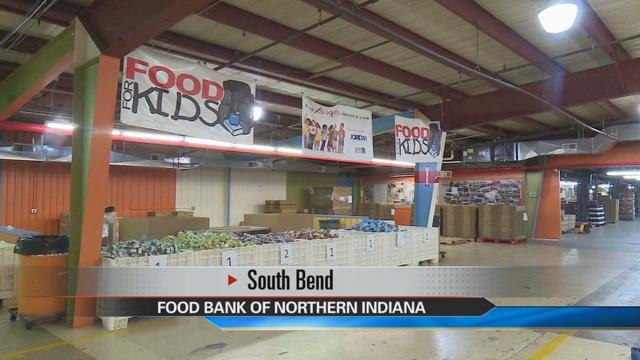 The Food for Kids Backpack program is feeding thousands of children in need across Northern Indiana. It’s in its tenth year, but wouldn’t be successful without its sponsors and donations from the community.

It runs out of the Northern Indiana Food Bank in South Bend. Their presenting sponsor is the Jordan Automotive Group and they’ve been involved with the program since 2009.

“It was going be on a short-term basis, a month or two to raise some money and it became part of our culture,” said Bob Hayden, the Vice President and General Manager of the Jordan Automotive Group.

One in four children in Northern Indiana live in a food insecure household. The program started so that children can focus on learning rather than being hungry.

From monetary donations and sponsors, the food bank buys food to fill children’s backpacks every weekend and holiday break during the school year. It’s designed for students in grades kindergarten through sixth. The program has grown immensely over the years.

“At the beginning, I believe it was 3 schools so you can imagine all of the kids that we’re touching in the elementary schools with this program,” Hayden said.

The program starts every September, but it’s never too late to make donations, volunteer or to become a sponsor.

“We don’t fund the entire program. We do our best to be the presenting sponsor and to kind of drive that bus but certainly churches and other donors even some of our customers on an individual basis find a way to give back,” Hayden said.

If you are interested in making a donation or getting involved with the program, visit http://feedindiana.org/programs/food-4-kids