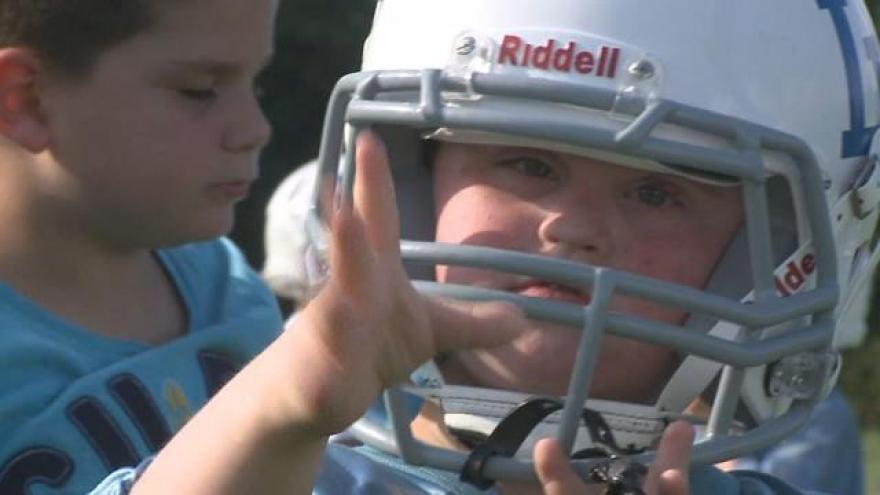 For many athletes, they dream of one day playing professionally. All 8 year old Max Adkins wanted to do was play.

Born with Down syndrome, Max quickly found interest in football according to his dad, David Adkins.

"You put on any football game. Doesn't matter what team, college, professional. He'll watch from beginning to end," David said.

Raised in New Jersey, David and his wife, Janice, tried many times to get Max into youth football many times. But whether it be too dangerous or being flat out ignored, nothing ever seemed to come to fruition.

After the family moved to Indiana this past year, Janice convinced David to ask again if Max could go out for youth football. The response shocked him.

“We asked what tests we needed to do to get him on the field,” David said. “They said, ‘Just bring him to practice, no worries. We’ll get him situated with gear and everything.’”

On the way, Max thought he was just going to another practice to watch all the players. Once his father brought the pads to him, reality started to set in.

"When we got here, and he was handed the pads, it all clicked for him. He kept saying, 'Me? Me?' Yes Max, you're going to be on the football team and it was like a kid at Christmas." David said.

Watching practice Monday, you would never think Max Adkins is a player with Down syndrome. Just a kid playing the game he loves.

"One of the questions was, did you have to explain Max's condition to the kids? We never did, we threw him right in there,” Lewis said. “The other kids knew to help him out along the way, just like they do with all the younger kids whose first year it is."

For Max Adkins, all he wanted to do was play football. The dream became a reality, and now he’s on to the next dream.

“You want to make a tackle?” David says to Max.

“Yeah!” Max says with a smile.

“You’ll get one Bud, you just have to keep working.”