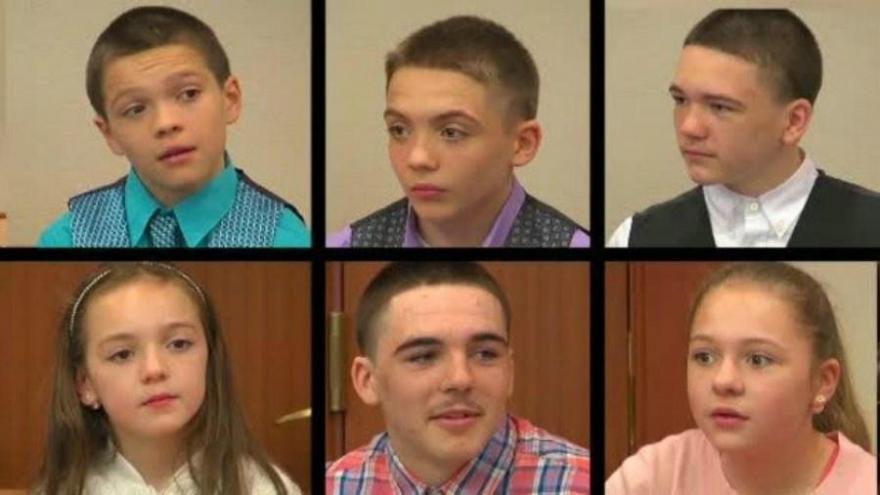 Forest Park, OH -- When Christopher and Christina Sanders became foster parents, they made a deal with one another: Regardless of how many children came into their home, they would do what they could to keep existing families together and not sentence children to lives of being shuffled between different households.

They kept that promise Thursday when they officially welcomed six new children -- all blood siblings who wanted to remain together -- into their family.

"We were having a rough life (before)," 13-year-old Caleb told Judge Ralph Winkler in the Hamilton County Adoption Court.

"And you feel like you're in a safe place now?" Winkler asked.

Caleb and his siblings Coby, Christian, Caylee, Carson and Chloe were adopted Thursday morning into a family that also includes the Sanders' five biological children.

It's a significant expansion -- one that has the couple searching for a 15-passenger van to transport all of their children -- but for the children, it's a dream come true.

"She's the sweetest sister ever and I love her so much," said Caitlin Sanders of the newly adopted Chloe.

And it's not just the parents improving their children's lives: Christopher Sanders said his new children have had a strong positive impact on him, too.

Although it's easy to tell that the children are not all blood related -- Christopher and Christina Sanders are black, and their six new children are white -- it's also obvious that they're as close a family as anyone could hope for.

"We're all the same in God's eyes, so the color of anyone's skin has never had a bearing on any of this," Christopher Sanders said.

The family set up a GoFundMe account to help them buy a new van.