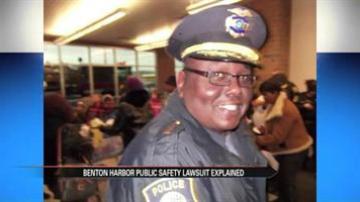 BENTON HARBOR, Mich.-- It's no secret the Director of Public Safety, Roger Lange, has had a tough summer.

In July, ABC 57 told you how he was put on administrative leave for not passing two firefighter qualification tests.

In the lawsuit filed Tuesday, he claims he never needed those tests and that he was unfairly targeted by Benton Harbor's Emergency Manager, Tony Saunders.

Lange says Saunders was after him for filing a complaint to the state of Michigan via a memo direct to the Governor's office.

It paints Saunders as a racist and says he fired two qualified public safety employees simply because they were white.

The letter and lawsuit detail racially charged comments that Saunders allegedly made telling one employee: "You can't be the Chief of Police because you are white."

And to another white candidate that he could never be the police chief because: "You are the wrong color and in case you didn't know it, you are not black."

Lange says the comments and terminations are violation of the Civil Rights Act and he says the retaliation he faced for saying something violates the Whistleblower Act.

Now, he wants thousands for losing his own job and being publicly humiliated in the process.

Lange did not want to go on camera with ABC 57. ABC 57 also reached out to Tony Saunders--we have not heard his side of the story yet. We will keep you updated on how this unfolds in court as well as Saunders' side of the story.