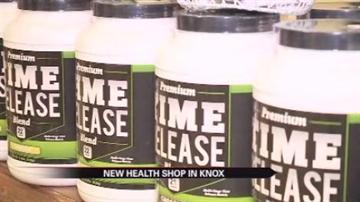 KNOX, Ind. --  Eric Keen, a former body builder says he has beat the odds, and now he wants to help others do the same.  In early December, he opened Keen Performance, a health store on Main Street.

Eric Keen was born with Cerebral Palsy.  Keen said from the beginning, doctors pretty much wrote him off.

"They predicted I would be a vegetable that would have to be essentially cared for."

As an adolescent, Keen struggled with depression.  When he was eighteen, his brother invited him to the gym.  He started working out and eventually started competing in body building contests.

Keen says that trip to the gym changed his life.

After winning several titles as a body builder, Keen decided he wanted to help others in need.

"There's tons of people out there that could have the same skill.  But they just don't have the cash so I am hoping I can just overall help those people," Keen explained.

On December 5th, he opened Keen Performance.  From sports fanatics to aspiring body builders to just about anyone who is interested in being healthy, there is a little something for everyone.

A percentage of the proceeds will go towards training others with disabilities who are searching for that drive to get off the couch.