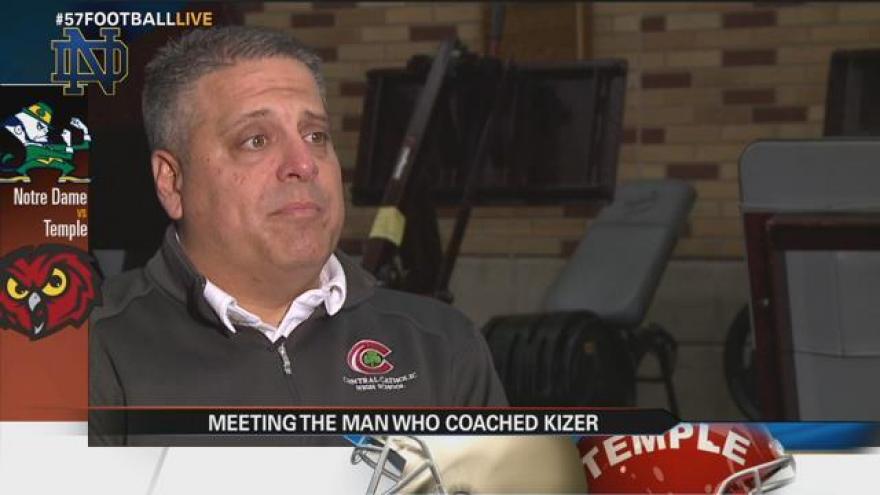 There's a lot of pressure on the football players at Notre Dame. This year DeShone Kizer was thrust into the starting quarterback spot after Malik Zaire's injury in Virginia. Since then, he has proven he's worthy of the job.

ABC57's Emily Evans went to Toledo to find out what makes this talented player tick.

He's coached at the school for 16 years.

He wins state championships and breeds star athletes, like Kizer.

"Coach Dempsey is one of the best high school coaches in the nation," Kizer said.

Not long ago, Kizer played the hero for a different Fighting Irish team.

"He thrives on it a little bit. He always did. He saved us a few times around here late in games no doubt about it," Coach Dempsey said.

At Central Catholic High School, the end zones read Irish, the players are taught to "play like a champion today" and a different type of touchdown Jesus watches over these young men before they take the field.

"He was a great leader here," Coach Dempsey said.

It's where Kizer learned the fundamentals to become a champion.

Before he donned blue and gold, before he played on national television each Saturday, before he was "the guy" at Notre Dame, the Central Catholic Fighting Irish are the ones he went to battle with.

"He's really good on the big stage. He likes it. I'd say he's a very confident kid. He's not cocky or arrogant, but he's confident. He's got a swagger to him, we talk about around here," said Coach Dempsey.

"He's one of those guys that kind of can make you sick because he could pick up a sport probably and just be very good at it," Coach Dempsey said.

A natural athlete, and a natural leader - Dempsey says Kizer was born for this.

"I think you even see it at Notre Dame where they take on a little bit of the personality of the guy that's leading them and right now things are going really well there," Coach Dempsey said.

Kizer gives Coach Dempsey a lot of credit for his success.

"I don't believe I would be in the position I am now without him," said Kizer.

So far this season Kizer has tallied more than 1300 passing yards and ten touchdown passes.