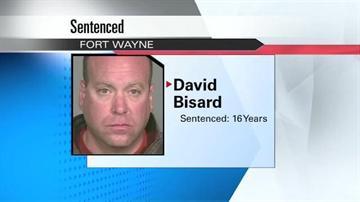 A judged sentence David Bisard to16 years in prison with three years suspended.

The sentencing came down one day after Bisard resigned from the IMPD.

He was found guilty in early November of drunk driving and causing a crash that killed one person.

"Best outcome is that David Bisard goes to prison, he serves his sentence and he comes out, he's a good father to his children and he never causes any harm and never gets arrested again," said Deputy Prosecutor Denise Robinson. "For me, that's the best result."

The three years suspended sentence will be spent on probation.