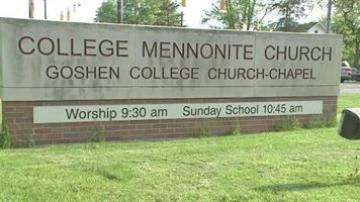 GOSHEN, Ind. -- A former Goshen College employee is speaking out about one of the school's employment policies. The woman is a lesbian and says she had to hide her relationship for two years because of the fine print in her contract.

It says the college only accepts employees that engage in sexual relations in a marriage between a man and a woman.

The school said they accept all people no matter their sexual orientation as students, but since they belong to the Mennonite Church, they make it a point to stick to those values when it comes to their employees.

“When we hire applicants for new positions we ask them to sign our commitment to community standards and that includes a section on sexuality,” says Jodi Beyeler, Director of Communications and Marketing at Goshen College.

Beyeler says the Mennonite belief system has always been the backbone of the school.

"We ask our employees to abide by that understanding," says Beyeler.

Most new employees understand that without incident, except for Tabi Berkey.

For years, she has been out as a lesbian and not shy about her sexual orientation.

She says that had to change once she started working at Goshen College.

She believes she was forced to hide who she really is because of that one sentence.

“My fiancee and I would go out to dinner and act like any other couple so there was always a worry that the wrong person would see," says Berkey. “It was painful and difficult at times.”

Berkey says she worked for Goshen College despite this hardship because her beliefs are so strong.

“Everything that I stand for in my spiritual beliefs, and my own personal beliefs, they all align with Goshen College, and that’s why I had originally started there," says Berkey.

Now that Berkey has found a new job, she hopes by sharing her story she might persuade the college to change their policy.

“I think that by changing the hiring policy, they would be able to reflect those values more truly and that’s what I’m trying to do,” says Berkey. “Even if that doesn’t happen, I think it’s important for the administration and the Mennonite church to see how this policy affects people and their everyday life.”

“Our board has had some conversations about our hiring practices in the past and will continue to do so in the future," says Beyeler.