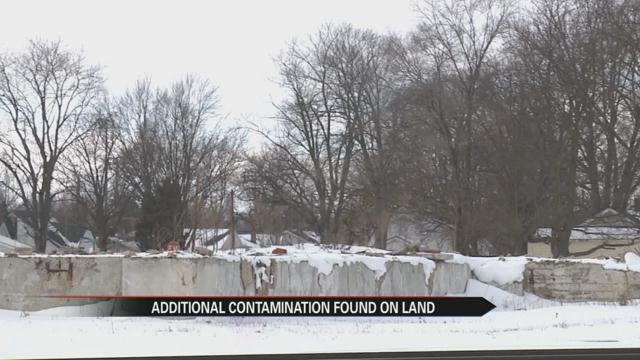 More contamination has been found at an already toxic and deserted Johnson Control site in the city of Goshen. The mayor says he wants it cleaned up, now.

Asbestos was found in piles of debris located on the old Johnson Controls site at 1302 East Monroe Street.

Attorneys for neighbors who live near the site say for years the company had been mismanaging hazardous waste.

“When it is private property and we don’t have any jurisdiction it’s really tough for us to push people to do what they need to be doing,” says Goshen Mayor Jeremy Stutsman.

According to the lawsuit, at that point Johnson Controls told neighbors everything was fine.

Around that same time Tocon's plans for the site fell through so demolition of the site began in 2012.

Everyone could see the rubble was an eye sore but neighbors had no idea it would also turn into a health concern.

In 2014, the ground contamination lawsuit began.

While investigating the case, lawyers discovered that some important documents were missing.

They could not find any proof that asbestos removal had been completed before the plant was torn down.

At the end of January, the attorneys representing neighbors tested the debris and in February the results came back positive for asbestos.

“There is some potential this could cause some issues. So we just want to make sure that all the groups involved are doing whatever they can to minimize that and get it taken care of,” says Stutsman.

Stutsman has contacted both state and federal environmental agencies. They are expected to show up next week and conduct their own tests.

“We are sure they will find it but they have to go through their process,” says Stutsman.

He adds their process includes collecting their own test results. This take about a day and then they will precede to containing the asbestos by covering the debris with heavy tarps.

Actual clean up would be done by the summer.

Stutsman says through the process he wants to have an open door policy.

“It is important to keep the community involved and informed of what is happening so there is not a lot of guessing out there,” says Stutsman.

Neighbors say they can’t talk because the law suit is still ongoing. One neighbor did say she just wants to know how the situation went on so long.