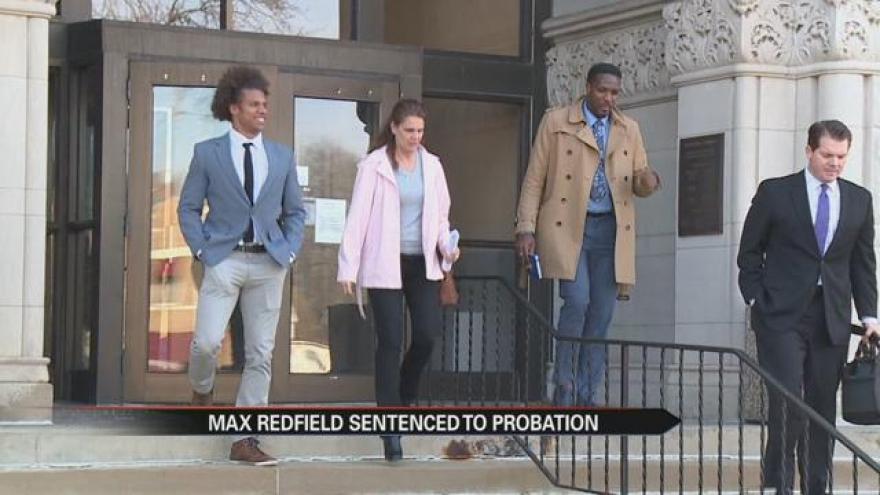 Former Notre Dame football player Max Redfield was sentenced to one year probation Tuesday morning after pleading guilty to possession of a handgun without a license and possession of marijuana.

“I couldn’t be happier to try to move forward from this and continue to learn from it like I have been for a number of months,” said the former Notre Dame Safety, Max Redfield.

Redfield was all smiles leaving the Fulton County Courthouse Tuesday morning, even taking a moment to wave at ABC 57’s camera.

The judge accepted Redfield’s plea agreement, which requires him to complete one year of probation in exchange for no jail time.

“I couldn’t be happier. A year probation is something I’m more than willing to go under and take part in to move on from this,” said Redfield.

One year probation is also what Redfield’s former teammates Dexter Williams and Ashton White are facing after being sentenced at the Fulton County Courthouse back in November.

However, there’s one big difference in their punishments.

“Of the 5 Notre Dame student athletes that were involved in this incident, Max was the only one that was removed from the football team, had his scholarship taken away and was ultimately expelled from the university just six credits short of obtaining his degree,” said Redfield’s attorney, Randy Fisher.

“It’s definitely the hardest thing I’ve ever had to gone through. Being alienated from my teammates and peers as well, and also being so close to finishing my degree and completing my football eligibility, which is why I went to Notre Dame, was something that was definitely difficult and will be difficult for  me to live with for the rest of my life,” said Redfield.

Redfield says he just wants to finish his degree so he can play for one more year at another school.

“The way Coach Kelly categorized my dismissal as player conduct makes it so that I can’t play for any scholarship programs this next season, so being a graduate transfer is the only way I can play this next fall…but if Notre dame doesn’t honor my degree, then I can’t be a graduate transfer,” he said.

Redfield and his mom say they’re trying to be positive and move forward.

“I’m really proud of how he’s handled everything, and I just echo what he said. We’re just looking forward to moving on and into the next phase,” said his mom, Kathy Mora.

“I wouldn’t be at this point without having some of those mistakes and decisions that I made that weren’t the best for me, and I’m happy, wouldn’t want to be at any other point. This is an incredible learning experience, and I’m happy to move forward,” said Redfield.

The two players who have still not been sentenced, Kevin Stepherson and Te’Von Coney, are both set to appear in court in April.