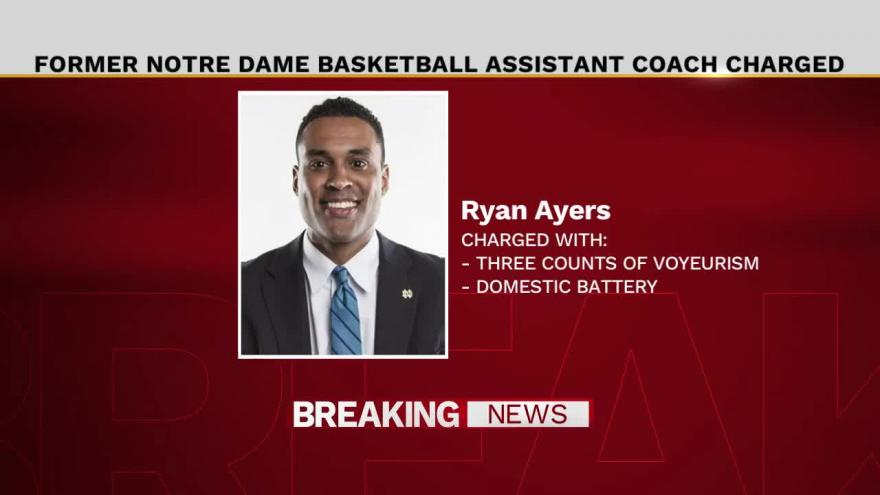 ST. JOSEPH COUNTY, Ind. -- A former Notre Dame men’s basketball assistant coach has been charged for allegedly taking nude photos of his girlfriend without her consent or knowledge and for allegedly hitting her during an argument, according to the probable cause affidavit.

On July 20, 2020, the first victim contacted the South Bend Police Department to file a domestic battery report against Ryan Ayers.

Two days later, detectives spoke with the victim about the case.

She told police she had been in a relationship with Ayers for the last two years. On July 15, while driving with Ayers, she found messages from another woman on his phone and they got into a physical altercation, reports said.

The victim said Ayers took her phone and attempted to kick her out of his vehicle and struck her in the face, according to the probable cause affidavit.

She then got out of the car and eventually left the state.

The victim told police she had been contacted by an ex-girlfriend of a friend of Ayers who told her Ayers shared nude photos of her in a group chat with other guys, according to the probable cause affidavit.

Police said the St. Joseph County Cyber Crimes Unit recovered, “various images of naked women where they seem to be unaware that a photo was being taken of them. These images include the women in the shower, sleeping on a bed or in a sexual position,” according to the probable cause affidavit.

Several of the photos had GPS coordinates that showed the images were taken in St. Joseph County and included photos of the first victim. She confirmed the photos were taken of her at Ayer’s residence without her knowledge or consent, according to the probable cause affidavit.

Detectives obtained a search warrant for Ayers’ residence in South Bend and took photos of the residence, bedding, bathroom and shower that appear in the photos taken from the iCloud, reports said.

Detectives learned there was a second victim and spoke with her.

She told police she had been in a romantic relationship with Ayers in 2018. During the relationship he asked if he could record them having sex and she told him no, according to the probable cause affidavit.

She told police a few weeks later, in April 2018, she was with Ayers when she saw Ayers recording the two of them. She asked Ayers to delete the video, according to the probable cause affidavit.

The second victim shared an email exchange with Ayers where he apologized for taking video of them having sex, reports said.

The 2009 Notre Dame graduate returned to the university in June 2016 as an assistant coach for the men’s basketball team.

Notre Dame announced on September 21, 2020 that Ryan Ayers was not longer a member of the basketball program. “He is pursuing other opportunities” the announcement said.

When contacted on Tuesday, men’s basketball head coach Mike Brey released this statement, “The University and I decided that Ryan was unable to continue in his role to be a leader of young men, so it was necessary to make the staffing change a few months ago. This is a personal issue for Ryan and we won’t elaborate any further."

Ayers has not been taken into custody. A warrant has been issued for his arrest.