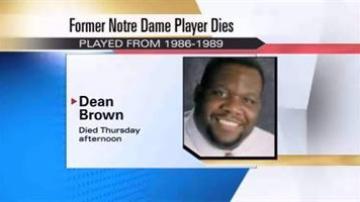 Brown was a starter on the 1988 national championship team.

His brother-in-law says Dean went to the hospital with an upper respiratory illness. A nurse asked him to walk and he collapsed in the emergency room.

His brother-in-law says he was an amazing man of God who thought of others before himself.

He was the principal at the Nexus Academy of Cleveland.