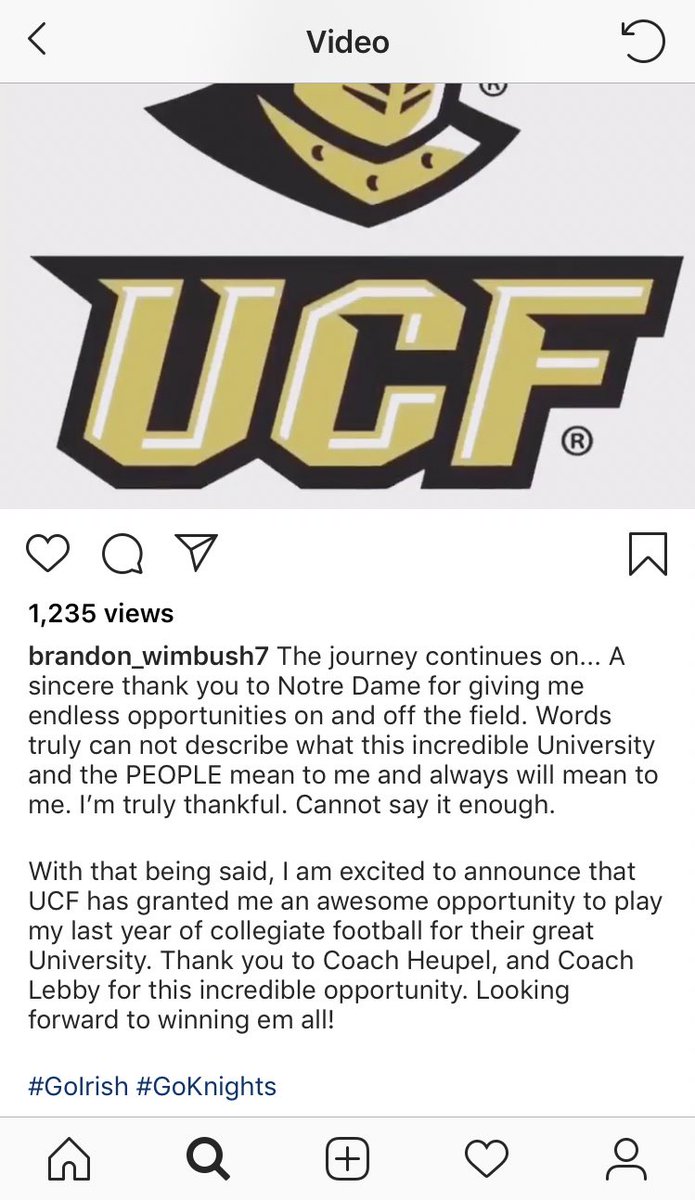 "The journey continues on...," Wimbush wrote in the caption under a video of his Notre Dame highlights ending with the UCF logo. "A sincere thank you to Notre Dame for giving me endless opportunities on and off the field. Words truly cannot describe what this incredible University and the PEOPLE mean to me and always will mean to me. I'm truly thankful. Cannot say it enough.

"With that being said," he continued, "I am excited to announce that UCF has granted me an awesome opportunity to play my last year of collegiate football for their great University. Thank you to (Head Coach Josh) Heupel, and (Quarterbacks Coach Jeff) Lebby for this incredible opportunity. Looking forward to winning em all!"

The former starting quarterback is a graduate transfer, having already completed his degree at Notre Dame, meaning he'll be immediately eligible to play next season in Orlando.

Wimbush led the Irish throughout the 2017 season, scoring 30 total touchdowns during that campaign. That mark included 14 rushing scores, a program record by a quarterback.

Though he went 9-3 as a starter in 2017 and began 2018 leading the Irish to three more wins, Wimbush was replaced by current starter Ian Book due to inconsistency in the passing game. He made one final start on Senior Night against Florida State, throwing three touchdowns to keep Notre Dame's undefeated regular season alive with a blowout win.

Though his plans were not officially known until Tuesday's announcement, it seemed a done deal that Wimbush would be leaving South Bend for his final year of eligibility. Notre Dame football's official social media accounts offered the following send-off nearly two weeks ago.

Your dedication to this team the last four years has been unrivaled. You will forever be a part of our #NDFamily, @WimbushB7.#GoIrish ☘️ pic.twitter.com/4tgmolhhYm

Wimbush joins a UCF program that has enjoyed plenty of success in the American Athletic Conference. Before a loss to LSU in the Fiesta Bowl, the Kights owned the nation's longest winning streak with 25 consecutive victories.