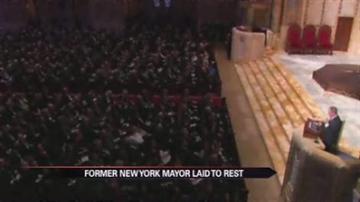 He served as mayor of New York City for three terms back in the 70's.

"No one understood the job like he did and no one was more eager to talk about it. He was always available, always direct, always wise," said Bloomberg. "For example, I remember the time we were talking about how to tackle obesity and he said `Limit the size of sugary drinks. No one will notice.'"