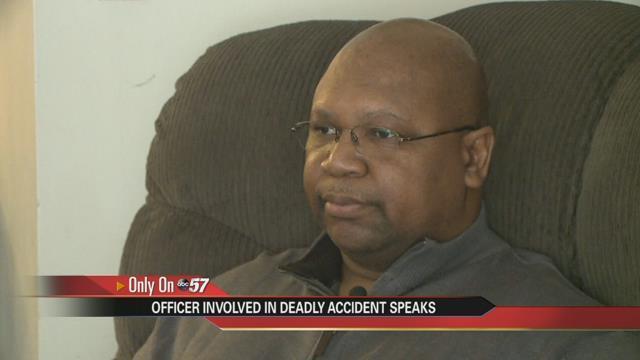 The former Benton Township officer who was convicted of a traffic violation after striking and killing a pedestrian while driving his patrol vehicle spoke exclusively with ABC57.

Eugene Anderson Jr. is now unemployed and facing up to a year in jail for the accident on Pipestone Road in September 2015.

“With my experience, over 21 years, I basically was doing the same thing I always have done, was go to a domestic without lights and sirens to sneak up on the assailant, and making an arrest," said Eugene Anderson Jr.

As Anderson drove in his Benton Township patrol car to a domestic violence call without his lights and sirens on, his vehicle struck and killed 48-year-old Kimberly Bedford of Hartford, Michigan.

The entire accident was captured on the dash camera. (An edited version of the video is posted above.)

“I saw a blue shirt, only a blue shirt. I didn’t know if it was a male or female, but I knew it was a person," said Anderson.

That’s what Anderson, a 20 year military veteran and 21- year law enforcement veteran says he saw the moment the accident happened.

What was his reaction right after the accident happened?

“Well, I can’t say that on camera, but I was shocked. I was startled, and, I was surprised," said Anderson.

Bedford was pronounced dead at the scene. A toxicology report later revealed her blood alcohol level was above the legal limit to drive.

One month after the accident, Anderson was charged with one count of moving violation causing death, a misdemeanor.

“I was expecting to be innocent because of the degree of alcohol in her system," said Anderson.

But last week, a jury found Anderson guilty and he now faces up to one year in jail.

“I was just doing my job. Just trying to go to another domestic call, that was it," said Anderson.

The Berrien County Prosecutor’s Office says Anderson was traveling 65 miles-per-hour in a 35-mile-per-hour zone when the accident happened.

Anderson says he doesn’t think he was going that fast.

“We as officers don’t look at our speedometer while we’re driving, so actually I don’t know, to be honest with you," said Anderson.

To the family of Kimberly Bedford, he says he's sorry.

“Sorry that this happened. There’s nothing else that I can say – a human life is precious, and no one should lose their life in that kind of respect because of just walking in the roadway, but, just sorry," said Anderson.

Does he regret driving without his lights and siren on?

Sentencing is set for February 19. He and his attorney have filed for mistrial.

Anderson has also filed a lawsuit against the Benton Township Police Department for discrimination and harassment, but says he planned to file it before the accident happened.

There are few details about the lawsuit available right now, but Anderson says multiple events happened to him between 2013 and 2015 that led him to file it.

Anderson says he received approval to file the lawsuit on Sept. 10, 2015, just 10 days before the accident.

He says the accident delayed his filing of the suit, but now he is pursuing it.