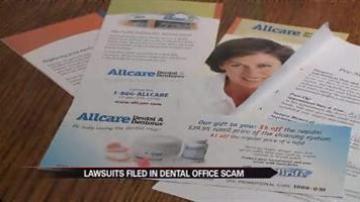 MISHAWAKA, Ind. -- It's been nearly a year and a half since Allcare Dental and Dentures closed 58 offices across 13 states without warning. Patients did not get the services they had already paid for and employees were suddenly left without jobs.

Now company president Robert Bates is under fire again after Indiana Attorney General Greg Zoeller filed a complaint claiming the company violated state laws. That is only part of Bate's problem, though. State and national class action lawsuits have also been filed by many patients.

ABC 57 News sat down, exclusively with one patient, apart of two of those class action lawsuits.

The Allcare signs have been taken down and a new business is in its place, but a year and a half ago dental patients like Danny Risener walked up to the locked doors for their appointments and found out the hard way that Allcare had gone out of business.

Danny Risener has a rare birth defect in his jaw. Over a year ago, the 40-year-old's jaw broke, along with several teeth. He needed a complete set of dentures. "Women who give birth say that is the ultimate pain, but I tell you when you have all your teeth pulled out of your head and the pain medication has worn off, that's the worse," said Risener.

Allcare performed a surgery that removed all of his teeth in preparation for his new dentures. Two weeks later, as he sat at home recovering, he turned on the television to learn the dental office had closed its doors for good.

"You run through every emotion that you can think off. You're mad, you're scared. You have these temporary teeth, they don't work, you can't eat, you can't talk".

By law, Allcare was supposed to notify patients in writing or publish notices three weeks in a row in a local newspaper about the closures. Risener said that never happened. So, he was forced to go find another doctor.

"They took care of me, they gave me my permanent teeth and that's when the insurance battle started".

Risener had already shelled out thousands of dollars for a full set of dentures from Allcare. This time, his insurance company would not pay for another set since it had already paid once. So, he had to pay again. In total Risener spent $4,000 out of his own pocket.

"Obviously somebody, somewhere did something wrong. All these people paid all this money and the money went somewhere".