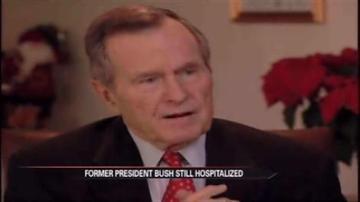 He was admitted more than a month ago and has been battling the lingering effects of bronchitis.

At one point, doctors said he would be home for the holidays.

But a family spokesman said a low-grade fever and other issues kept him from being released.

"He's had a series of setbacks that have complicated the time-line for his release, but his doctors have been cautiously  optimistic  that they have his current issues under control," said Jim McGrath. "He's surrounded by his family. That's the best medicine. It's not the ideal way to spend Christmas, but he's playing with the hand he's been dealt."

The hospital said the former president is currently in stable condition. No word on when he will be released.