Former Quarterback Steve Beuerlein: Notre Dame is 'always with you' 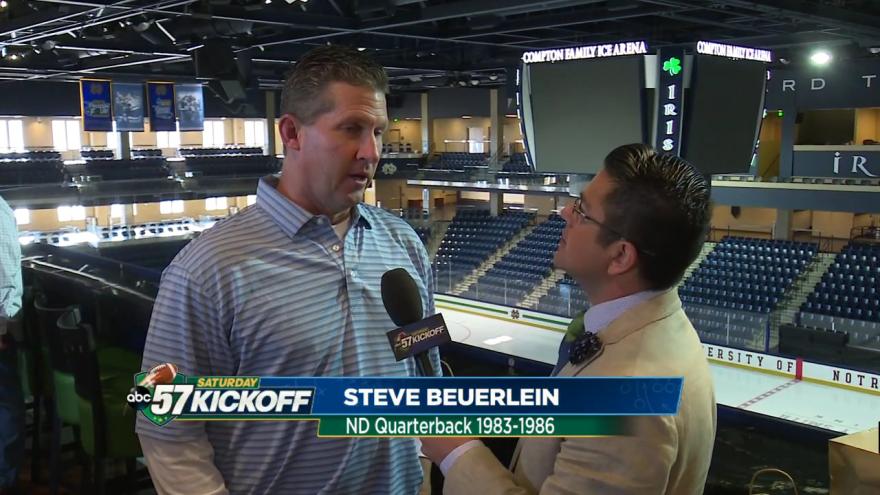 Former Notre Dame quarterback Steve Beuerlein played for the Irish from 1983-1986, but despite his accomplishments, he doesn't think of himself as a legend.

What does it feel like to be under the Golden Dome when he's back in town?

"Shoot, I was class of '87. We're right at 30 years right now. I find that hard to believe. Every year, you get a little more, hopefully you gain a little more wisdom as you go. You start to realize the places, the events and the people you came into contact with and really influence you and impact you the most. A lot of my most incredible connections, memories and life experiences happened right here, under the Golden Dome. I knew it was a special place when I was here, but you really don't appreciate it until you get out in the real world. You look back and you realize how fortunate you are to be a part of something like this. The great thing about Notre Dame is that it's always with you. No matter how old I get, and hopefully, I have a lot of years left, but this place is always going to be a place that hold special memories for me, but also provides so many unique opportunities and experiences. So, I'm looking forward to all of it," Beuerlein said.

"I'm so grateful I had one year with Lou Holtz. It was a gift from heaven for me. I had 3 years with Gerry Faust and those we're tough years. We never really figured how to put it all together and get the most out of ourselves. To get that one year with Lou, not only as a team, but the impact it had on me individually.  My last year with Gerry Faust was a very, very difficult year. I was coming off a tough shoulder injury and I was not able to play at the level I was capable of playing. Lou had faith in me and allowed me to get healthy again and show what I could do. If it wasn't for him, I wouldn't have had a chance to play at the next level, in the NFL so many years. Outside of football, he's been a tremendous influence on me and I'm very, very grateful for that year," Beuerlein said.