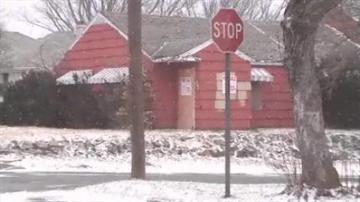 SOUTH BEND, Ind. -- It was once a well-to-do African American neighborhood in South Bend, but much of the 2 block stretch of North Elmer Street fell victim to crime. Some of the original community members are holding a forum in hopes of improving the neighborhood.

"It hurts to see it because it was my original home but it is in complete disarray,” said Leroy Cobb of South Bend.

Cobb, 82, is proud of the neighborhood for how it came to be and used to be.

He says back then African Americans were being pushed to live in certain neighborhoods.

But he, his wife and 23 other black residents became the pioneers of this community development on North Elmer Street by forming the group Better Homes for South Bend.

The group has disbanded and most of those people have moved.

The neighborhood has changed.

"It started declining right in the 90s,” said Cobb.

"It's been sad really to see what has happened over time,” said Regina Williams-Preston.

Williams-Preston grew up in the neighborhood and is hoping to turn things around for the residents who call North Elmer Street home.

"Being able to tell this story maybe even at this time it happens to be Black History Month but it's just a great way to get people connected and excited about this project,” said Williams-Preston.

Williams-Preston is spreading the word by holding forums.

Tuesday night, one of the current residents who will be in attendance is Beverly Reynolds, Leroy Cobb's daughter.

"I think there should be a change over here the house that I grew up in across the street it looks nothing like the house when we were living there it was a beautiful house now it's just all rotten away,” said Reynolds.

They're hoping with the community's help the history can be restored.

The forum is sponsored by the Community Forum for Economic Development.