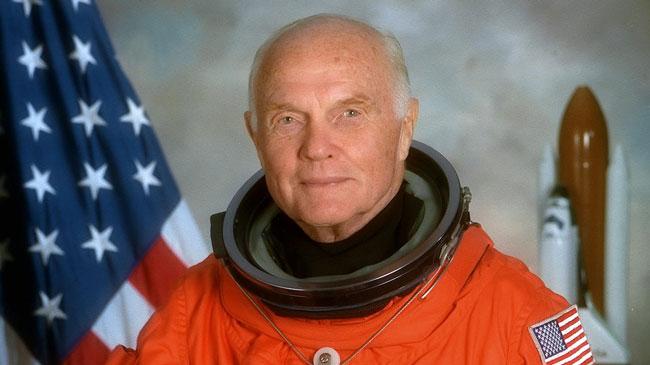 (CNN) -- John Glenn, a former US senator and the first American to orbit the Earth, died Thursday, according to Ohio State University. He was 95.

John Herschel Glenn Jr. made history in 1962 when he completed a three-orbit flight in a cramped space capsule dubbed Friendship 7. He later served for nearly a quarter-century as a US senator. In 1998, he returned to space at age 77, becoming the oldest person to ever do so.

Born in the small eastern Ohio town of Cambridge on July 18, 1921, Glenn recounted an idyllic childhood where "patriotism filled the air."

"Love of country was a given. Defense of its ideals was an obligation," Glenn wrote in his memoir. "The opportunity to join in its quests and explorations was a challenge not only to fulfill a sacred duty but to join a joyous adventure."

Glenn developed a fascination with flying at an early age. When he was 8 years old, he and his father went for a ride in an open-cockpit biplane, two years after Charles Lindbergh made his transatlantic flight. That adventure sealed his destiny as a future pilot.

He also developed an early love for childhood playmate Anna Margaret Castor. By the time they got to high school, they were sweethearts. Both were in Muskingum College in New Concord, his mother's alma mater, when Japanese forces attacked Pearl Harbor on December 7, 1941. A short time later, Glenn enrolled in the Naval Aviation Cadet Program and graduated the following March. He joined the Marine Corps in early 1943, and wed his childhood sweetheart on April 6 of that year.

After Korea, Glenn became a test pilot for Naval and Marine aircraft and, in 1957, set the transcontinental air speed record. He flew a Vought F-8 Crusader from Los Angeles to New York in 3 hours and 23 minutes -- the first transcontinental flight to average supersonic speed.

With that feat, Glenn became known as one of the top test pilots in the United States and a natural candidate for the country's emerging space program.

He eagerly volunteered when NASA requested pilots for its suborbital and orbital programs, and in 1959 he and six others -- Alan Shepard, Gus Grissom, Scott Carpenter, Wally Schirra, Gordon Cooper and Deke Slayton -- were selected as the first astronauts, known as the "Mercury 7." Glenn was the last living member of the group.

On February 20, 1962, Glenn rode an Atlas rocket into history as the first American to orbit the Earth. He was the third American in space, behind Shepard and Grissom -- whose missions aboard smaller Redstone rockets were short, suborbital flights. The Soviet Union by that time had sent two cosmonauts, Yuri Gagarin and Gherman Titov, on orbital flights.

After making three orbits in 4 hours and 55 minutes, Glenn landed in the waters off Grand Turk Island in the Atlantic Ocean, 800 miles southeast of Bermuda, where he and his Friendship 7 were retrieved by the destroyer USS Noa.

Glenn recalled in a Life Magazine article a strange phenomenon that occurred during the mission: "There, spread out as far as I could see were literally thousands of tiny luminous objects that glowed in the black sky like fireflies. I was riding slowly through them, and the sensation was like walking backwards through a pasture where someone had waved a wand and made all the fireflies stop right where they were and glow steadily."

The flight also featured a glitch that contributed to Glenn's reputation for being cool under fire.

Because of an indicator light showing that the Mercury capsule's heat shield was partly detached, mission controllers decided to bring Glenn home early and told him not to jettison his aft retro rockets, which allowed him to maneuver the craft in space. Because the retropack was strapped to the heat shield, it was thought it would provide an extra measure of security.

It would later be learned that the heat shield wasn't damaged, but the fiery re-entry was made more spectacular by the scorching retropack in Earth's upper atmosphere. Glenn's first words when he stepped aboard the deck of the USS Noa were, "Boy, that was a real fireball of a ride!"

Later in life, Glenn poked fun at the risk.

"We used to joke about it in the past when people would say, 'What do you think on the launch pad?'" he said in a 1998 CNN interview.

"And, the standard answer was, 'How do you think you'd feel if you knew you were on top of 2 million parts built by the lowest bidder on a government contract?'"

Glenn's mission was more than just a round-the-world space journey. It was a psychological boost to a nation worried about the Soviet Union's early lead in the space race.

Shortly after landing, Glenn was honored with an enormous ticker tape parade in New York City on March 1, 1962. An estimated 4 million people turned out.

Glenn's success bolstered America's spirit and gave credence to President John Kennedy's 1961 pledge to put men on the moon. But Glenn would not be one of them.

Kennedy reportedly ordered NASA not to fly Glenn again because he was too valuable as a national figure. Glenn resigned from the space agency in January 1964.

Glenn's fame made him a natural candidate for political office and, shortly after his resignation from NASA, he announced he would run for the Democratic ticket for a US Senate seat in 1964. But his political career was sidelined for a few years when an injury forced him to withdraw from the campaign.

Glenn then joined Royal Crown Cola as a vice president and later as president. Yet he remained interested in politics. He was also a close friend of the Kennedy family. On June 5, 1968, Glenn was with US Sen. Robert Kennedy at the Ambassador Hotel in Los Angeles, hours before Kennedy was shot by Sirhan Sirhan. Kennedy died the next day.

"Who knows what might have happened if Bobby had been president," Glenn reflected shortly after his 90th birthday, in a 2011 interview with the Dayton Daily News.

"I know he had just about more compassion for the underdog, for the poor, the downtrodden than, I think, just about anybody that I ever knew."

After a failed bid for a US Senate seat in 1970, Glenn won in 1974, beginning a 24-year-long career representing Ohio on Capitol Hill. He was widely regarded as an effective legislator and moderate Democrat. He played a key role in weapons control, authoring the Nuclear Nonproliferation Act of 1978, which prohibited the sale of nuclear equipment to nations that currently have none.

Glenn -- along with fellow Mercury 7 astronauts Grissom and Shepard -- was awarded the Congressional Space Medal of Honor in 1978 by then-President Jimmy Carter.

More than 20 years after their historic mission, the team was immortalized in the 1983 movie "The Right Stuff." Glenn -- portrayed by actor Ed Harris -- didn't care much for the film, saying, "I thought it was dramatic enough without Hollywood doing its number on it."

Despite his rock-solid reputation as an American icon, not everything went perfectly for Glenn. In 1984, he decided to run for president, confidently declaring, "With the nomination of my party I firmly believe I can beat Ronald Reagan."

He was knocked out of the primaries early on.

A return to space

As he grew older, Glenn never gave up his dream of flying in space again, or, as he called it back in the Mercury days, being "a willing guinea pig."

At age 77, a year after retiring from the Senate, Glenn accepted an invitation from NASA to rejoin the space program as a member of Space Shuttle Discovery on a nine-day mission to study the aging process, which mirrors what astronauts experience during long durations in space.

On October 29, 1998 Glenn became the oldest human ever to venture into space, and his flight proved once again that he was a man who embraced a challenge.

For most men and women, fame is fleeting and greatness is often short-lived. For John Herschel Glenn, Jr. it lasted a lifetime.

Glenn is survived by his wife of 73 (April 6, 1943) years, Annie, his two children, John David and Carolyn Ann (Lyn), and two grandchildren.