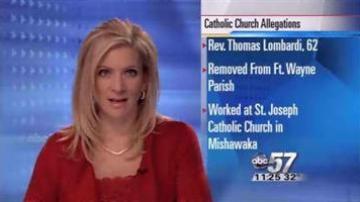 FORT WAYNE, Ind. – There is new problems for the Catholic Church.

Officials say the pastor of a Fort Wayne parish has been removed from his position after an accusation that he sexually abused a minor.

The man in question is 62-year-old Reverend Thomas Lombardi. The Fort Wayne-South Bend Catholic Diocese told members the charges against him were from "some years ago at another parish."

According to the Journal Gazette, Lombardi worked as associate pastor of St. Joseph Catholic Church in Mishawaka in the mid-80s.

Church officials say they and police are still reviewing the case.