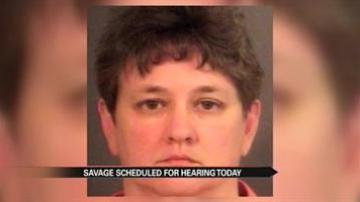 Kim Savage has been charged with two counts of Class D felony theft for allegedly running a catfishing scam.

In court, Savage requested a bond screen so she can later ask for a bond reduction and the court orded the bond screen.

Savage was the head bookkeeper for the County Clerk's office before being arrested in November, then fired.

The charging documents say the catfishing scheme was part of an elaborate hoax, one that's been going on since at least 2006.

Court documents claim that the 44-year old used these fake identites to convince the alleged victims, Jodi Montbriand and Jill King, that the two made-up men were romantically interested in them.

Over time, those women deposited thousands of dollars into Savage's account to have wired overseas to their alleged love interests.

Police checked with the U.S. government and discovered that neither Montbriand or Santori are serving in the U.S. Marine Corps.

According to court records, Savage allegedly admitted to creating the false identities in order to get money out of the victims.