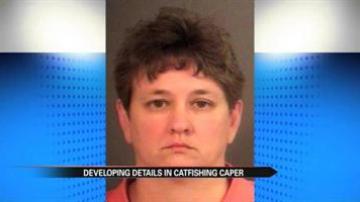 ST. JOSEPH COUNTY, Ind. -- The woman who is accused of "catfishing" two women for several years and faces theft charges was the head bookkeeper in St. Joseph County, Indiana. Her former supervisor says they were shocked to hear the news and said the county's funds were never breached.

The two Marines didn't exist, according to court records.

Until Thursday, Savage was the head bookkeeper for the clerk's office at the St. Joseph County courthouse.

Her former supervisor, Terri Rethlake, of the St. Joseph Clerk of the Circuit Court spoke about Savage.

"Very kind person, very caring person to many of us here," said Rethlake.

Savage won't be handling any accounts any more.

"We just want to make sure the public knows that none of the monies in this office has been breached," said Rethlake.

Investigators are in the process of searching her computer since Savage handled financial information.

"The fines and costs that people pay or settlements and whatever money we collect, people come in and pay restitution or pay in a civil case," said Rethlake. "Her computer has been locked down. All of her access to all the accounts and any other kind of computer programs that we have, have all been terminated as of today."

Rethlake said it's a tight-knit office and everyone was shocked to hear the news.

Police say savage had been manipulating unsuspecting victims for the last 8 years, but started to unravel in 2011 when Savage blew her cover.

Savage was allegedly on the phone with one of the victims pretending to be a male Marine in Afghanistan when she crashed her car and accidentally slipped back into her female voice.

Savage was in court Friday and her next hearing is December 2.