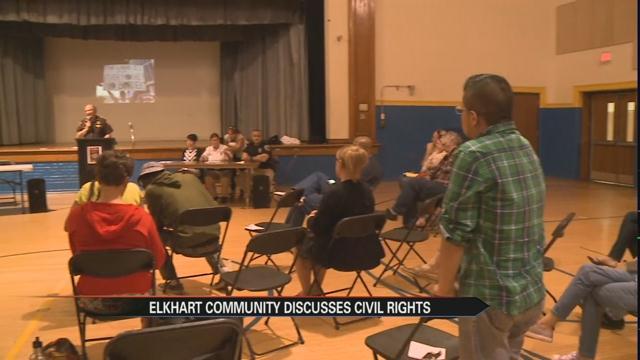 A forum was held in Elkhart on Saturday to discuss civil rights and race relations in the community.

The President of the National Association for the Advancement of Colored People in Elkhart County said police and minority interaction is something that needs to be discussed.

Ronnie Davis said, “Well there's room to improve. Every group has some bad apples and the bad apples make all of them look bad.”

The meeting was held at the Roosevelt Center and was hosted by the Criminal Justice and Immigration Working Group and Superstar Showcase Entertainment.

For one mom, this topic hits close to home.

In March, Eugenia Neely's daughter received a note in her locker at school that included a racial slur.

Neely said no disciplinary action was taken against the students involved, however she has been working with authorities to stop racial hatred.

Neely said, “To get some information and know my rights basically and try to get some answers and figure out what's going on and plus it will be informative for my daughter.”

Nyzeria Neely said, “I got a note and it said [expletive deleted] don't belong here.”

Neely said, “Like I said, children are our future, working with the kids in the future is basically the whole main focus.”

Elkhart County Sheriff Brad Rogers was in attendance and he said dialogue between police and the community can be preventative and informative.

Rogers said, “There always can be tensions in a community, and some of it is how police respond to that. And how leaders respond.”

Rogers hopes to have more forums because he said the riots in Baltimore can happen anywhere.

Rogers said, “This is what leaders do in this community to avoid things like Baltimore.”

Event organizers said they are working to schedule the next forum to target the younger generation.