Founder of Shelton Farms dies at 110 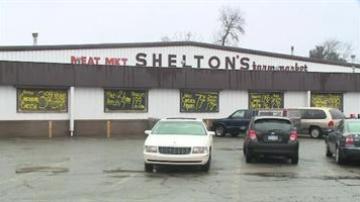 NILES, Mich. -- The founder of Shelton Farms in Niles passed away Wednesday morning. Ethan Shelton was 110 years old. His son says the business was so successful because his father had a good heart and worked hard.

"He was in no hurry to go. He said that he would go out of this world kicking and screaming," said Jim Shelton.

Ethan Shelton moved his family from Alabama to Michigan many years ago in hopes of creating a better future for his family.

Shelton Farms started as a small fruit farm with his wife Rose. The farm later turned into a food market.

Jim watched and worked as the farms grew into a store.

"We had bought several small farms, no one big parcel. And we grew as we could afford to grow. He was that type of person. He wasn't afraid of it, but he did not want to get buried in it so we did a lot of squeezing pennies," said Jim.

As one of the oldest independent markets still standing in Michiana, Jim says his dad never gave up on the family business.

"If competition gets tough, just get with it, roll up your sleeves up and go to work. That was his attitude," said Jim.

Jim says his father made the market a success.

"I think his impact if anything was just making the name Shelton mean something to the community," said Jim.

Jim says his father was well liked because he never spoke a negative word about anyone. He put his heart into his family, work, golf, and his gardening.