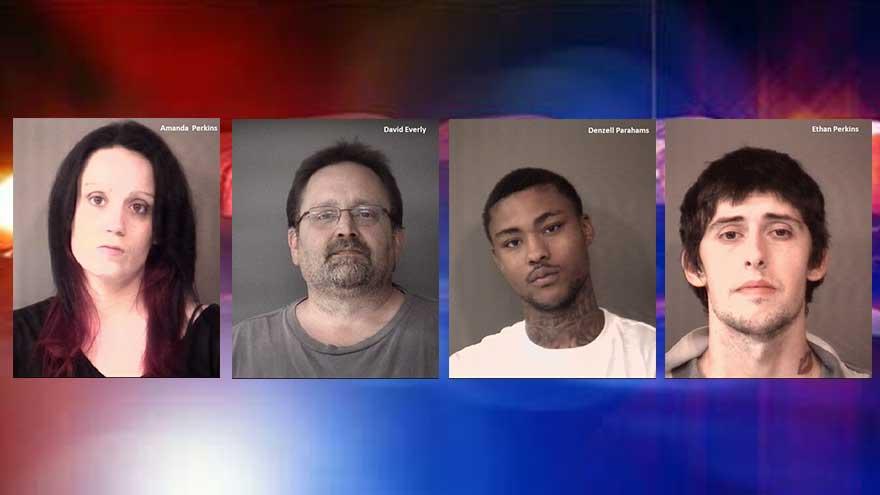 On Tuesday afternoon, Warsaw narcotics officers interviewed Amanda Perkins about the alleged drug activity. While speaking with her, they learned a drug dealer from South Bend left a handgun in her car.

When officers searched Amanda's vehicle, they located the Smith & Wesson revolver as well as 15 grams of heroin, crystal meth and marijuana, according to Warsaw Police.

Amanda told officers she had just sold .3 grams of heroin to her father at a local hotel.

Officers obtained a search warrant for the hotel room and found David Everly and Amanda's two children, ages 10 and 7.

Police said they found .2 grams of heroin, guns and ammunition in the hotel room.

Amanda allegedly admitted to dealing drugs out of the hotel room.

Police also learned there were additional drugs at Amanda's home.

Undercover narcotics officers conducted a buy at the residence and purchased an ounce of crystal meth, police said.

After the buy, police served a search warrant at the home and took Denzell Parahams and Ethan Perkins into custody, police said.

More crystal meth was located and over $1000 cash was on located on Parahams, police said.

David Everly, 53 years old, of Warsaw, was charged with level 6 felony possession of a narcotic and felony aiding, inducing, causing. He is being held on a $5,250 surety bond.

Denzell Parahams, 21 years old, of South Bend, was charged with level 2 felony dealing in narcotics between 5-10 grams, and level 3 felony possession of narcotics between 10-28 grams. He is being held on a $25,250 surety bond.

Ethan Perkins, 28 years old, of Warsaw, was charged with level 2 felony dealing in methamphetamine over 10 grams, level 4 felony possession of methamphetamine between 10-28 grams, and level 6 felony maintaining a common nuisance. He is being held on a $25,250 surety bond.

All were transported and booked into the Kosciusko County Jail.