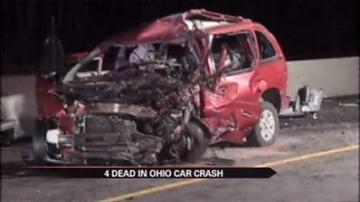 DAYTON, Ohio. -- Just days before Christmas, a car crash in Ohio claimed the lives of four people including a 7-year-old child.

According to police, a driver made a U-turn on I-75 near Dayton and ended up driving the wrong way on the interstate.

He crashed into a family of six, killing himself and his seven year old son.

One man who witnessed the crash, is thankful that it wasn't his family involved.

"It's scary. You're close to something really, really terrible, and you're thankful everybody in your car is safe," said James Gilchrist, a witness.

The interstate was closed for over four hours Sunday morning, causing quite the headache for holiday travelers.