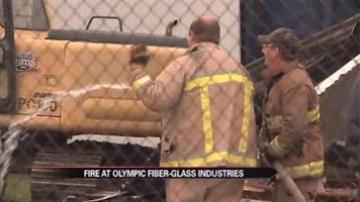 ROCHESTER, Ind. -- Four fire departments were on scene of a business fire at Olympic Fiberglass Industries on East 4th Street in Rochester Wednesday afternoon. Crews remained on the scene until nightfall putting out hot spots and excavating part of the building that was destroyed.

The business makes portable toilets, like the kind you see outside college football games and summer festivals.

Rochester Fire Chief Tom Butler said, "Either something happened that malfunctioning with the pump that built up pressure and blew the line and then it sprayed the flammable material on the wall catching fire, they had fire extinguishers, the employees tried taking immediate actions with the fire extinguishers."

Chief Butler said the 911 call came in 2:30 p.m.; the flames sparked a massive blaze in the rafters on the east side of the Fulton County business that took four fire departments hours to contain.

He said, "What we did is made a trench cut where we set up a defensive posture where we cut across the roof about a five inch gap and got ahead of the fire and we were able to stop the fire from spreading." A tactic he said that normally allows fire crews direct contact with the flames. However, with Wednesday's abnormally high winds Chief Butler said the roof method didn't stop the flames.

Chief Butler, "We did try to set up a good defensive posture, but the wind unfortunately, once the heat and the roof started to buckle, the wind was getting underneath and driving the fire."

The owners didn't want to go on camera, however their daughter told ABC 57 News this isn't the first fire the business has endured. She said in 1986 a blaze totally destroyed Olympic Fiberglass Industries, but they rebuilt the same year. At this point she said she wasn't sure what her parents will do this time around. She wasn't even sure if they had current insurance on the property, but she did say the company has been operating in the same location since the 1970's.

Chief Butler said, "With today's situation we are in economically you just hate to see a small business, which they were, suffer a loss, you know it might not be totaled but we still have a loss never the less."