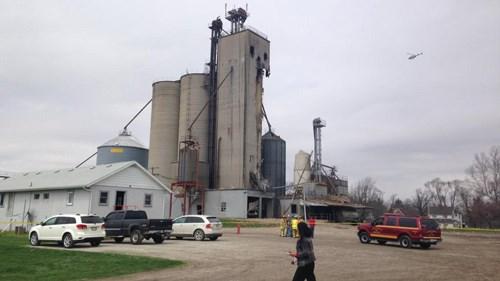 Four people were injured in a grain elevator explosion at the Co-Alliance LaCrosse Feed Mill on Howard Street in LaCrosse, in LaPorte County around 10 a.m. Thursday.

The grain elevator that exploded is approximately 175 feet tall and has structural damage.

Nearby residents heard the explosion.

“We first thought it was thunder,” said resident Tracie Vernich.

“At first it kind of felt like an earthquake,” said Justin Kiel, LaCrosse Town Council member.

“Then it got louder and it shook the house,” said Vernich.

“We looked out the back door we saw a big bloom of smoke and dust coming off the grain elevator,” said Kiel. “I put my shoes on and ran over here as fast as I could.”

Within minutes, the LaCrosse Fire Department and LaPorte County EMS responded to the scene.

“It was immediately determined that in fact there was an explosion at the grain elevator at Co-Alliance located on Howard Street in LaCrosse,” said LaPorte Sheriff John Boyd.

“One man was coming out. He was kind of stumbling. He was covered in dust all over his face. His hands, the skin was just ripped off of his hands,' said Kiel.

“They had burns on their hands,” said Vernich.

Jonah Pacione, 19 and Emilio Galicia, 43, were taken by helicopter to the St. Joseph Burn Center in Fort Wayne with critical, life-threatening injuries.

Craig Chase, 34 and Chris Fort, 26, were taken by ambulance to Porter Memorial Hospital in Valparaiso with possible life threatening injuries.

The La Porte County Sheriff's Office says there are no indications of foul play or a criminal act.

“We have no theories at this point. But it is a grain elevator. And we also know that grain dust is volatile. So we're keeping that in mind,” said Boyd.

OSHA, the state Fire Marshal and the ATF are all investigating the explosion, in addition to local law enforcement officials.

The grain elevator is part of the Co-Alliance based out of Avon, Indiana.

“Our thoughts and prayers are with the employees who were injured today. We have notified their families and provided them the location of the medical facilities where their loved ones were taken for treatment. Co-Alliance personnel will be on-site at the hospitals to provide support and assistance to the employees and their families,” said Co-Alliance CEO Kevin A. Still. “We do not yet know the cause of the accident, but will work with the authorities in their investigation.”

The area has been roped off because of the fear the elevator will collapse.

Employees may be transferred to another location to work.